In 1806, 100-acre Lot 7, Concession 1, South Division Fronting the Lake, formed part of a 2600 acre land grant in southwestern Etobicoke made to Colonel Samuel Smith. Smith had been a great favourite of Lt. Gov. John Graves Simcoe, under whom he served in the Queen’s Rangers during the American Revolution. Smith died in 1826, and Lot 7 passed through five different owners before it was purchased by Richard Newborn in 1847. 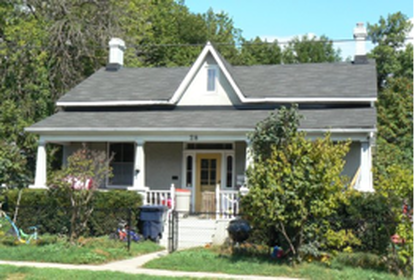 8 Daisy Avenue.
Richard and Lucy Newborn had emigrated from Lincolnshire, England, between 1830 and 1835, and in 1837 were living in Toronto Township (Mississauga).  Sometime between 1847 when they moved to the Etobicoke property and the 1852 census, they built the house that is now 28 Daisy Avenue in Long Branch.

The house was built in the Gothic Revival cottage style popular in Ontario 1840-90, especially for farm houses.  It has one and a half storeys and is constructed of local fieldstone covered in stucco, with two foot thick walls.  Its gable roof has a medium pitch, giving the house a lower and wider appearance than is typical of later examples of this architectural style.  Within the roof, a small central gable over the front door contains a small window.  The two gable ends of the main roof enclose matching brick chimneys.

The house still possesses its original front door with two windows featuring semi-circular tops in the upper half and two wooden panels in the lower half.  The door is flanked by two sidelights with semi-circular tops, and a mullioned transom window above. 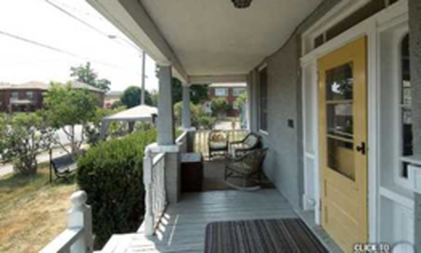 The large wooden front verandah is raised four steps above ground level and extends across the entire front of the house.  It is covered by a sloping roof supported by four tapering, squared, stuccoed columns that rest on square brick piers.

Richard and Lucy had one daughter born while they were in England, and then four more daughters followed by three sons born in Canada. The eldest son, Richard Robinson Newborn, was born in 1843, and when he became old enough, he worked the farm with his father.  Richard married Susannah Copeland of Peel County in 1869, and the older and younger Newborn families lived together on the property.

In 1911, the executors of Richard Newborn Jr.’s estate sold the south 41.15 acres of the property to the Lake Shore Land Co. Ltd.  The land was developed and marketed by Colonel Frederick Burton Robins as the “Lakeshore Gardens” subdivision, one of the first of seven 20th century subdivisions in what would become the incorporated Village of Long Branch by 1931. Robins lived in Toronto and entered the real estate business in 1885. In 1908, he established his own company, Robins Limited.  He subdivided many estates and farms in the Toronto area, selling these properties through offices in London, Glasgow and Detroit.  In this way, he was responsible for the creation of many well-established neighbourhoods across today’s GTA.


The Newborn house was preserved by Robins at the centre of the Lakeshore Gardens subdivision.  In 1911 the house was sold to Hugh McCullum - a farming neighbour from adjacent Lot 6 - who owned the house until his death in 1922.  It was then sold to William Walton who owned it until 1949.  The next owner, Elizabeth Mitchell Whitehead, lived in the house until she passed away in 1977.


Since then, the house has had at least seven owners.   Despite the years, this home’s heritage features have, for the most part, been retained, and it is listed on the City of Toronto’s Inventory of Heritage Properties. However, it recently came to the attention of EHS that the current owner had applied to make changes to the house that may not have been consistent with its heritage status.  As of September 2012, the house was listed for sale and described in the MLS listing as follows:  “Charming 1850 Century Home Right in The City. Renovated Kitchen Cabinets, New Upstairs Windows (2006), Recently Painted, New Breaker Box (2005), Roof (2005), 2 Skylights (one 2010), Pot Lights in Hallways, and 2 Bedrooms Upstairs. Excellent West Beaches Location. Built in the 1850s with 2 Foot Thick Walls. Features Large Lot 44X125. With lots of potential, this is a Very Charming Home.”


As a result, the EHS Board made the decision to nominate 28 Daisy Av. for Designation, which would afford it a higher level of protection under the Ontario Heritage Act.  We believe that this property has cultural heritage value or interest for the following reasons: 1.     The property has design or physical value because it is a rare, representative and early example of a style, material and construction method.

2.     The property has historical value because it has direct associations with a theme that is significant to a community.

3.     The property has contextual value because it is physically and historically linked to its surroundings and is a landmark.