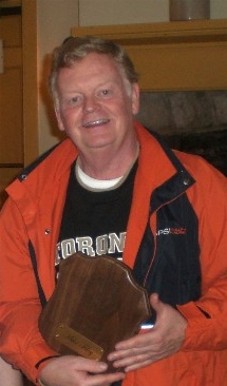 Mike Filey
Mike Filey is receiving the 2009 Jean Hibbert Memorial Award for his decades of dedication in researching, recording and promulgating the fascinating history of the city for which he has such a great passion – Toronto.

Mike was born in Toronto and educated at Ryerson Polytechnical Institute where he received a diploma in chemical technology.  Following a nine year stint with what is now the Ontario Ministry of the Environment, he worked in event planning and public relations with the
Canadian National Exhibition for 5 years and Canada's Wonderland for 4 years.

However, over 25 years ago now, Mike turned his interests to his true vocation – researching, documenting and speaking about Toronto's history. He has written over two dozen books on various facets of Toronto's past. Some of his most popular books have been about the TTC, an interest he has had ever since he first relied on streetcars at age eight to get from his home at Bathurst and Bloor to the Wychwood Public Library at Bathurst and St. Clair. Other topics have included Mount Pleasant Cemetery, Sunnyside, a collection of "Then and Now" photos of Toronto, several other collections of old photos, and 9 books full of "Toronto Sketches'.

All of his books are chock full of photographs from his own collection and historical details, presented in an accessible style that gives them great appeal to both Torontonians and professional historians alike.

Mike has contributed a popular weekly column entitled "The Way We Were" to the Toronto Sun since 1975 – 34 years.  He is also featured on his own radio show on the New AM 740 at noon every Sunday.

Mike is much in demand to lead guided tours of Toronto and present illustrated talks on aspects of Toronto's history, the most popular of which is "Toronto, Then and Now." He is also the number one Toronto "history expert" of choice for the many radio and TV stations that call on him to be interviewed on Toronto history issues.  Much of this work has been done on a volunteer basis.

In all of these ways, Mike has been instrumental in bringing about a higher level of awareness of Toronto's past among its citizens. For his love for this city, his extensive research, and his consistent willingness to share his knowledge with us all, we present Mike Filey with the 2009 Jean Hibbert Memorial Award.
More Recipients