For a short period of time from about 1939 to 1952, the portion of today’s Martin Grove Road south of Rathburn Road to Bloor Street West was named McGee Road. Who was McGee and why did he have a street named after him?
​
Harry McGee was born in Kilcooley, Tipperary, Ireland in 1861. He attended a business college and completed his apprenticeship as a merchant in Ireland before coming to Canada in 1882. He spent a year with family in Huron and Bruce counties before moving to Toronto. In August 1883, after working briefly at the Golden Griffin Silk and Clothing House on King Street East, he secured a position at Eaton’s Department Store for $6.00 per week. Within a few months he became a department head, and then the supervisor of several departments. He was made a director in 1906, Second Vice President in 1907, and later First Vice President.  With his flair for growing the business, he was placed in charge of planning and building new stores all across Canada. 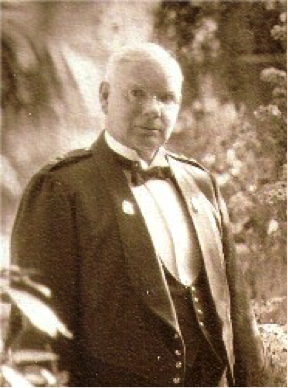 Harry McGee (Ancestry)
McGee married Nellie McBride in 1892 and they lived in Forest Hill village.  They had three children, but two died in infancy, and their only surviving child, Isabel, died of pneumonia in 1932 at age 34. The McGees had two grandsons through Isabel – John and Harry Porter.
To help offset the high pressure of his professional life, McGee found sanctuary in the west end of Toronto.  He golfed at the Lambton Golf Club as often as he could.  In 1909 he purchased a property on the waterfront in Mimico, east of Superior Avenue, and built an estate house named “Kilcooley” after his Irish birthplace.
​
About 1926, McGee also bought a 100 acre farm in Etobicoke where he loved to roam the pastures and woods. He called his farm “Harnelbel” – a name that combined Harry, Nellie and Isabel.  The farm ran north from Burnhamthorpe Road to Rathburn Road, on the east side of today’s Martin Grove Road. 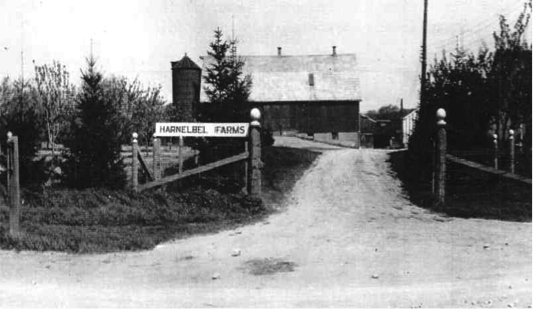 Harnelbel Farm (Robert A. Given Collection)
McGee had a great interest in agriculture. He specialized in Ayrshire dairy cattle which he imported from Scotland and bred under the award-winning Harnelbel name. In 1938, the largest sale of pure-bred Ayrshires ever held in Canada to that date took place at McGee’s farm where 100 head were auctioned for $14,655. He served as Royal Winter Fair president for four years.
​
In 1928, McGee’s 45th anniversary at Eaton’s was celebrated at a huge employee gathering in Mutual Street Arena, and the company presented him with a Rolls Royce. Two years later, he was made an honorary Colonel of the Irish Regiment of Canada. He had donated a large amount of money to equip the regiment during World War I and was affectionately known as “the father of the regiment”.
Harry died in 1939 at his Forest Hill home, leaving a $1.2 million estate.  It was shortly after his death that the road on the west side of Harnelbel Farm was named McGee Road in his honour. Nellie died in 1943 and was laid to rest beside her husband in the mausoleum at Mount Pleasant Cemetery.

On December 18, 1939, the barns at Harnelbel Farm were destroyed by fire.  Twenty head of cattle were saved, but just as many died. The financial loss, including that season’s entire hay crop, was estimated at $20,000.  Soon after this the farm was sold and the property developed. Kilcooley was also sold and by 1944 the estate house had been turned into a restaurant and banquet hall called "Kilcooley Gardens." It was demolished in 1957 and replaced by apartment buildings.