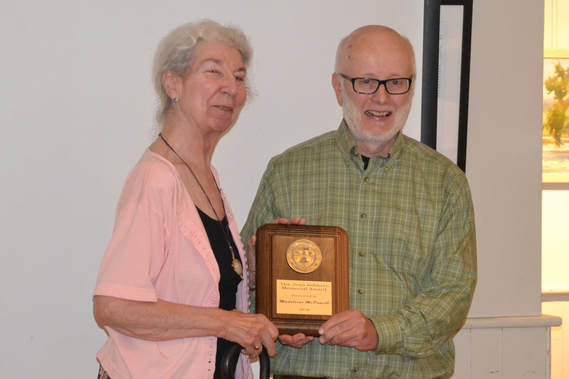 President Joel Winter presents the 2018 Jean Hibbert Memorial Award Madeleine McDowell at the EHS AGM on September 27th, 2018.
At the September 28th, 2018 Annual General Meeting, EHS presented Madeleine McDowell with the 2018 Jean Hibbert Memorial Award - for her over 50 years of dedication to preserving and promoting the natural and cultural heritage of the Humber Valley and Lambton Mills.

Madeleine was in the original group that saved Lambton House from demolition and was involved in the restoration of the building. She tells people that her passion for the Humber River, the First Nations and settlement history came out of early trips that her parents took her along the Humber in old a cedar strip canoe.  She chaired the Humber Heritage Committee, which advocated for designation of the Humber River as a heritage river in 1999 and received an award from the Toronto and Region Conservation Authority for this work.

For Madeline, all members of EHS love history and this is largely due to people who have inspired us to learn about it and pass it on to others, and she is certainly one who has excelled at this. Therefore, the Board of Directors of the Etobicoke Historical Society are please to have presented Madeleine McDowell with the 2018 Jean Hibbert Memorial Award.