The Rowland and Culham families were friends, living in the same neighbourhood in South Wales. In 1838, encouraged by Culham cousins who had been living in Oakville since 1820, they decided to immigrate to Upper Canada. They sold their farms and booked passage for early April, 1838 on a very old vessel called the Albion which had already crossed the ocean fifty times. Before they got out of port, the ship’s anchor was lost and the departure was delayed two weeks. Further impeded by storms and severe winds en route, they finally entered New York harbour. While their luggage was transferred onto flat boats and moved by tug up the Hudson River to Albany, they travelled there by river steamer. They then transferred everything to a barge on the Erie Canal which brought them to Rochester.

From there, a boat took them across Lake Ontario to Toronto where they finally landed on July 4, 1838. The two families decided to settle near Malton in Toronto Township (now Mississauga.)

About 1840, Joseph Culham settled on Lot 12 and broken Lot 13 in Concession 5, Etobicoke. His 137 acres of land was on the north side of Dundas Street, immediately east of Etobicoke Creek, in the small village of Summerville.

​On April 30, 1859, Sage married Alexander MacPherson, the teacher at the local school who had been boarding in her home. 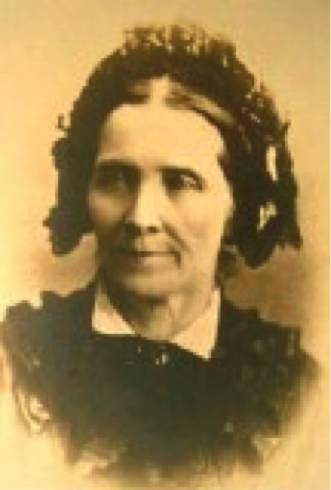 Sage Rowland Culham MacPherson
Alexander MacPherson had been born in 1823 in Lanark County. He was the youngest son in a pioneer farm family of modest income, but at age 20 he decided he wanted to obtain an education. He finished grammar school in Prescott where a cousin was teaching, attended a private academy in New York state, spent time at a Wesleyan Methodist academy, and graduated from the Toronto Normal School (teacher’s college) in 1856.
​
After teaching in Thornhill for a year, Alexander moved to Etobicoke in 1857 to teach at School Section No. 2, locally called the “Swamp School”, at the northwest corner of Bloor Street and Highway 27. In November 1859, Alexander and Sage gave birth to the only child they would have together. John Alexander Llewellyn MacPherson was born into a ready-made family consisting of three half brothers and two half sisters. 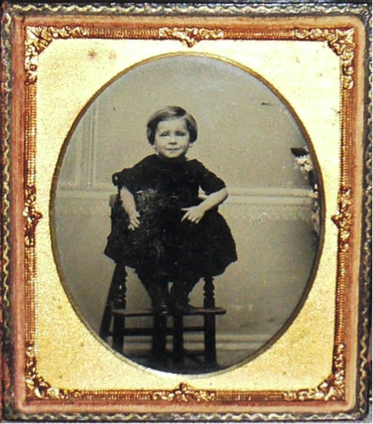 Tin Type of John Alexander Llewellyn MacPherson at age 5 in 1864 (Montgomery’s Inn)
According to Alexander's diaries, Sage worked hard to make the farm successful to provide a living for her family and, after their marriage, Alexander helped with the farm work as well.

Alexander bought a farm in Peel County in 1863 but it does not appear that they ever lived there. Alexander continued to teach at the Swamp School until he was appointed Clerk and Treasurer of Etobicoke Township in 1865. After that, moving to Peel was out of the question and he sold the Peel farm in 1868. Alexander held the Clerk/Treasurer position in Etobicoke until 1901 – 36 years.

In 1869, the family farm was turned over to Sage’s eldest son, Truman Culham, who was now 25 years old. Alexander, Sage and John moved into a house in the Village of Islington and in the 1871 census, Alexander is listed as a merchant.

​In 1878 Alexander bought land from the Thomas Montgomery Estate. This property was framed by Montgomery Lane (now Road), Bloor Street, Islington Avenue, and the CPR tracks. In the 1881 census, Alexander, Sage and John are listed as living there, with Alexander as clerk/treasurer and John as a farmer.

In 1879, Alexander bought and demolished an older frame house in Islington, replacing it by 1880 with a larger brick house he used as an income property. This house still exists today at 4884 Dundas Street West and is a listed heritage property.  John finished his elementary schooling in Islington in the one-room frame school located on the north side of Dundas, west of Islington Burying Ground. He attended continuation school (high school) in Weston, travelling there and back on horseback.

In 1882, John was advised by his doctor to find a job outdoors in a dry climate. He signed on with a survey party and was assigned work surveying the 24-mile square lots on the meridian running from Virden in south Manitoba to Red Deer Forks in western Saskatchewan.
John returned to Islington seven months later and took over the running the farm his father owned. They lived in a house on the west side of Montgomery's Lane, overlooking Mimico Creek.

As an adult, John was often called “J.A.L.” He married Frederica Moore in 1886. Frederica was the daughter of James and Jacobina Moore, who had a farm on what is now the west side of Islington Avenue, south of Norseman Street. Since John’s mother and her relatives had been among the early settlers in Etobicoke, as had the Moores, it was said locally that the wedding made relatives of half the inhabitants of Islington.

​The couple had seven children, one dying before her first birthday. J.A.L. was appointed Clerk of Etobicoke Township when his father, Alexander, retired in 1901. J.A.L. held the Clerk position for 11 years. The desk that Alexander and John used sequentially as Township Clerk is now in the Etobicoke Historical Society archives. 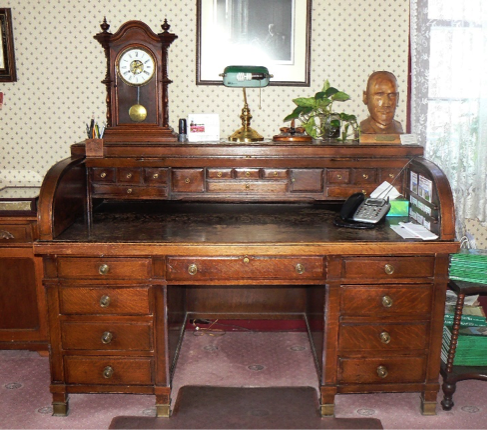 Desk used by Alexander and J.A.L. MacPherson when each was Etobicoke Township Clerk. Now in EHS archives. (D. Harris)
Sage died in 1904 and Alexander in 1906. They are buried together in Park Lawn Cemetery.

J.A.L. subdivided the family farm just prior to WW I, laying out three streets: Llewellyn Avenue (a cul-de-sac running east off Islington and later demolished to build a ramp up to Cordova Avenue), Rowland Avenue (later renamed Lomond Avenue), and Macpherson Avenue (later renamed Aberfoyle Crescent.) He built 25 homes on these streets in the next few years and moved into one of the houses on MacPherson Avenue. He also owned land on the east side of Montgomery Road, south of the CPR tracks, and developed it in stages between 1931 and 1947.

J.A.L. served as school trustee for a total of 48 years: 27 years as Islington Public School trustee and 21 years as trustee of Etobicoke High School. He was instrumental in having this high school – the first in Etobicoke - built on Montgomery Road in 1928. Etobicoke’s young people no longer had to travel to Weston for continuing education. John was also trustee of Islington United Church from 1878 to 1886 and then their Secretary-Treasurer until 1945.

J.A.L. helped establish Central Park (now Tom Riley Park) in the Mimico Creek valley in Islington. He persuaded the Montgomery family to donate land for the northern half of the park in 1941, and then he personally donated the land for the southern half in 1944. He was appointed chair of Central Park’s Board of Management in 1945, a position he held for many years.

J.A.L. was a skilled amateur wood worker, continuing to build wooden furniture even after he was confined to a wheelchair as a result of poor blood circulation in his legs. John also suffered from a neurological disorder which made his limbs tremble. His family found it terrifying to watch him use power tools with his shaky hands and poor balance. Riding in a car with him driving was quite an experience: he drove very fast, yet often could not tell if his feet were solidly on the brake. He and Ada went by automobile to Muskoka in the summers and to Florida in the winters for as long as the province allowed him to drive.

​J.A.L. continued to be in total command of his mental faculties until almost the end of his life, taking a keen interest in events around him. He died as a result of a fall on the stairs of his home, in September, 1961, a few weeks before his 102nd birthday. According to his family, the circumstances of his fall were typical of the man. He called to Ada to help him down the stairs, but then became impatient at the length of time she was taking (ignoring the fact that Ada was 87 years old herself.) He started down on his own with unfortunate results. So, as his family says, perhaps he actually died not of old age but of stubborn independence. 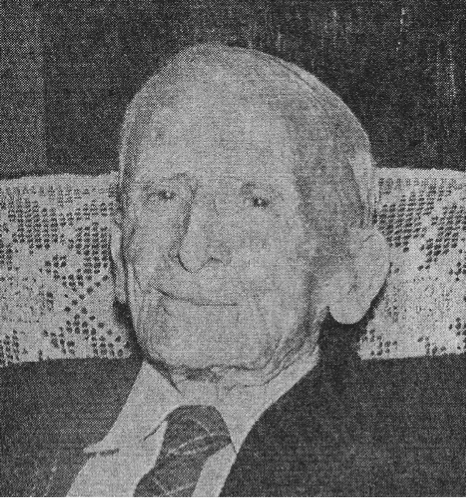 John Alexander Llewellyn MacPherson at age 96 in 1956 (Etobicoke Press)
Thanks to the Rowland, Culham and MacPherson descendants who have compiled much of this information about their families and shared it on Ancestry.