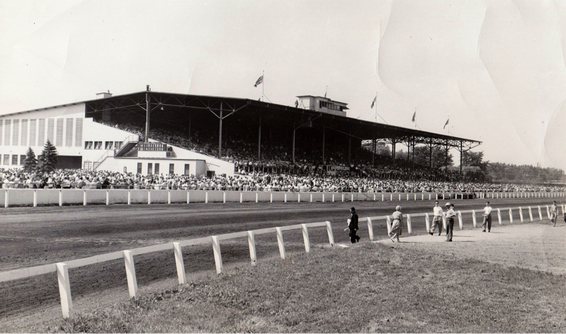 Long Branch Race Track in 1953 (Courtesy: Ontario Archives)
Abe Orpen, described by the media as "a gentleman with a shady reputation" or as "one of the most mysterious... men in the history of Toronto", had penchant for both gambling and horse racing. But he was also renowned for his honesty in dealing with betting men and for his generosity toward anyone down on his luck. His horse racing enterprises included several tracks in Toronto. When his Hillcrest Race Track was taken over for TTC yards, he quickly took a chance on a more distant locale and purchased a 98 acre property in Etobicoke on the north side of Horner Avenue, between Kipling Avenue and the CPR spur line to the west. On September 6, 1924, Orpen opened his new Long Branch Race Track with a half-mile track.

Despite its distance from the city, the track was an instant success. Throughout the late summer and fall, thousands would flock to the track to watch – and gamble on - both thoroughbred and standard-bred racing. In 1926, at a cost of $250,000, Orpen added a clubhouse and a mile-long track that encircled the original track. Long Branch was then the only race track in North America to have both half-mile and one-mile tracks.

Abe and his son Fred operated this track jointly until Abe died in 1937. Fred continued to operate it until 1955 when he decided to get out of the race track business and sold several tracks, including Long Branch, to E.P. Taylor of the Ontario Jockey Club. Taylor closed all of the smaller race tracks to push business towards the New Woodbine Race Track that he had opened in 1956 at Highway 27 and Rexdale Boulevard.

Long Branch Race Track’s legacy is that it was the site of two races that are still featured in Canadian racing today. The Canadian International Championship was first run as the Long Branch Championship Stakes in 1938. In addition, Abe Orpen’s wife, Isabella, initiated the Cup and Saucer Stakes for Canadian-foaled two-year-olds at Long Branch.

If you enjoy poking about for remnants of the past, one of two tall brick and stone gateposts that once marked the race track entrance still survives on Horner Avenue immediately east of the CPR track. In addition, a beautiful avenue of maple trees that lined the entryway still stands parallel to the CPR track. A City of Toronto heritage plaque in front of the gatepost tells the race track’s story and includes an aerial photo of the race track.