‘Brookwood’ Used as a Clandestine Gambling Den During Wartime 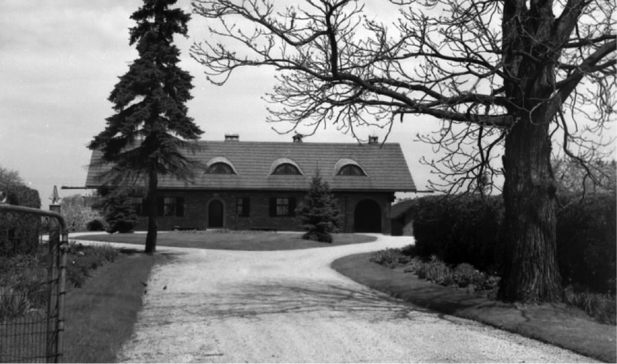 “Brookwood”, the home of Dr. Frederic and Mrs. Helen Davidson on the east side of Royal York Road, north of Coney Road, in 1955 (Courtesy: Toronto Public Library)
Buildings often have multiple uses over the years, but no one could have anticipated the way this beautiful 1911 home would end up being used in the 1940s.

In 1890, Frederic married Helen Mason, and they had three children. In 1911, Frederic and Helen bought a 26 acre lot on the east side of today’s Royal York Rd.  It’s east boundary was Mimico Creek, and its north and south boundaries were opposite where Norseman St. and Coney Rd. respectively are today.  They built a showcase home called “Brookwood”, modelled on a Swiss chalet with stone walls and a cedar roof.  Surrounded by tall trees and large formal gardens, it quickly became a local landmark.

During World War II it was difficult to find domestic help, so the Davidsons leased out their home to Samuel Mandel who advertised it as an elegant new restaurant called the “Brookwood Club.” On January 25, 1941 at 1:00 am, provincial police raided the premises, confiscating roulette wheels and other gambling paraphernalia. The police described Brookwood as the most luxurious gambling place they had ever seen. The immaculately dressed guests protested that they were simply there for dinner, although one man was found hiding under a bed with $1,800 in his pockets. Mandel was charged with operating a gaming house and keeping liquor illegally. He was subsequently fined $300, and nine patrons were convicted of being “found-ins.”

Because wartime rules made it difficult to remove even the worst tenants, Brookwood remained a clandestine gambling hall for several years. Frederic passed away in 1946 in Toronto after a long illness. The house was torn down in 1961 and replaced by Kingsmill Secondary School. That school closed in 1988, was transferred to the Metropolitan Separate School Board, and reopened in 1989 as Bishop Allan Academy.

Today, Frederic is remembered at U of T through an award in his memory instituted in 1948. Called the “Frederic Davidson Competition”, it awards prizes for the best essays on English or French literature.