Ever since moving to the “village” of Islington in 2001, I have heard the neighbours refer to a lovely old three storey house in the neighbourhood as the “Loblaw” house. But no one knew for sure what members of the Loblaw family had lived there and for how long.
The home stands on the southwest corner of Burnhamthorpe Road and Mattice Road with the address of 66 Burnhamthorpe Road. Overlooking the Mimico Creek Valley and the present day Islington Golf Club property, the house was named “Valleyview” when built c.1907 by Benjamin Johnston Jr.

In 1934, Alexander Loblaw, son of Theodore Pringle Loblaw, founder of the Loblaws grocery empire, purchased the house from Benjamin’s estate.

As part of Denise’s research on this home, she made contact with Alexander Loblaw’s youngest son Doug, who now resides in Courtenay, British Columbia. I had a lovely two hour phone chat with Doug to find out more about the home and his memories of growing up in the village of Islington.

The history of the Loblaw family in Toronto begins with Theodore Pringle (T.P.) Loblaw who moved to Toronto from Alliston, Ontario in 1890. At the age of 17, he found a job as a grocery store clerk. He used this experience in 1919 to open his own store which grew to become today’s chain of Loblaws grocery stores. T.P. Loblaw and his wife Isabella Adam built a large estate home on Etobicoke’s Lakeshore in Mimico and named it Bonnyview. After the untimely deaths of Isabella in 1930 and T.P. in 1933, the house was sold and later demolished.

The George Weston Ltd. bakery business was looking for a greater distribution network, so the company started buying Loblaws’ shares in 1935, eventually accumulating a controlling interest by the late 1940’s. The Loblaw family has no holdings in the company today.

In 1934, T.P.’s eldest son, Alexander, used his inheritance from his father to purchase 66 Burnhamthorpe Rd. The house was situated on a large 641 by 124 ft. (2 acre) lot stretching the entire block on the south side of Mattice Rd., west to Avonhurst Rd. A barn and a coach house were located on the side of the property facing Mattice Rd. just behind the house. The Loblaw family only had a short distance to move from their previous home on Burnhamthorpe Park Blvd. 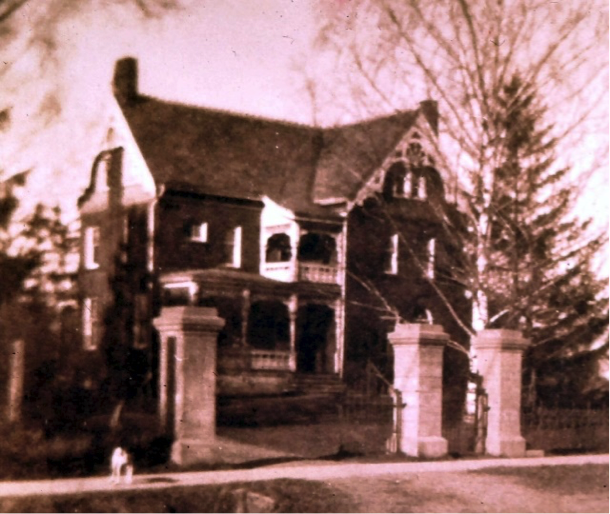 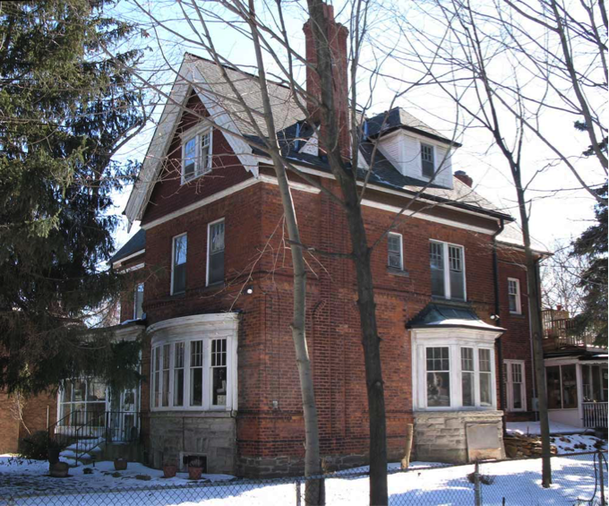 66 Burnhamthorpe Road in 2015.
Alexander began working for Loblaws in 1919 as a store clerk, making his way to store manager, then to area supervisor for several stores, and then to head of the buying department at head office. He drove every day from Islington to the  Loblaw head office at Fleet St. and Bathurst St.  When he retired, he was the only employee to have had a 50 year career with Loblaws.

Doug Loblaw was born on December 16, 1940, the younger of Alexander and Isobel’s two sons. The elder son Ted had been born 12 years prior. Doug has many fond memories of growing up at 66 Burnhamthorpe, which he described as a solidly built home “with 14 inch thick walls that were built to last”.

The house is three stories in height with 19 rooms including seven bathrooms, and a fully finished basement with laundry room, furnace room, workshop, recreation room and billiard room. His father Alexander completed a lot of interior renovations to the house as much was unchanged since being built as a farmhouse. It originally had an unusual slate roof that was still there when Loblaw sold the house in 1966. Slates could break from frost so they always kept spare slates on hand for repairs.
​
The main floor featured a large drawing room where Doug’s mother, Isobel Parks, could often be found expertly playing a baby grand piano.  (She was also the lead soprano in the Islington United Church choir.) Also on the main floor were the dining room, a den (forerunner to today’s family room), a powder room, a large kitchen and a sunroom with a small, tiled fish pond in which Doug kept goldfish and turtles brought back from their cottage on Puslinch Lake. 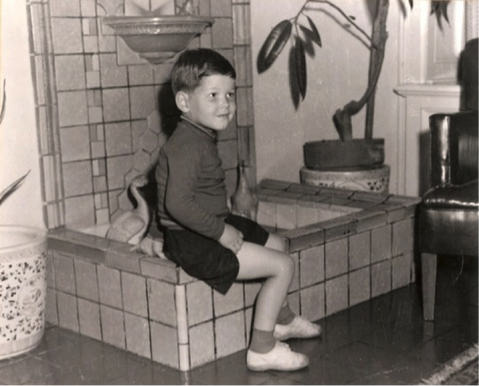 Doug Loblaw, aged 4, sitting at the fish pond.
The home was heated by a hot water system with a coal fired boiler. There was a coal bin at the side of the house into which coal deliveries were poured. It was then necessary to manually shovel coal into the boiler, a constant labour-intensive chore. Alexander Loblaw eventually installed a coal auger which would automatically feed coal from the exterior bin into the boiler for a constant steady supply. The boiler had to be cleaned every morning, removing the “clinkers” (debris left over from burnt coal) with large tongs and put into a steel trash can. The “clinkers” would be collected weekly by a truck. In the mid 1950’s the furnace was converted from coal to oil, and then to natural gas in the early 1960’s.

Alexander Loblaw also purchased 58 Burnhamthorpe Rd., renting out its two large apartments to two Loblaws employees and their families: Mr. Manning on the main floor and Mr. Myers on the second floor.

By 1939 Alexander had subdivided the two acre property into ten lots of which he kept the largest lot (66 Burnhamthorpe) and three adjacent lots (1, 3 and 5 Mattice). He then built bungalow style houses on the five further lots going west (7 to 15 Mattice) and leased them as revenue properties. He later sold them, with some bought by the long-term tenants. 15 Mattice was rented to Gordon Hendry who was the manager of the new Islington Royal Bank branch at Dundas St. W. and Cordova Av. Doug was allowed to cut the ribbon for the opening of the branch.

The old coach house on the property of 66 Burnhamthorpe was a cement block building. Originally it had two horse stalls and room for parking a couple of buggies or carriages. It later served as a three car garage, with an apartment on the second floor for hired hands. From 1948 to 1954, two of Alexander’s aunts from Aberdeen, Scotland lived in this apartment. They assisted the family after the death in 1952 of Alexander’s wife Isobel. Alexander then converted the main house into a duplex. The barn was also later converted into a two bedroom house (which became 1 Mattice Rd., but has since been demolished and rebuilt) for relatives of the family who had been occupying an apartment on the third floor of the 66 Burnhamthorpe home.

Alexander was a member of the Board of Trustees of Islington United Church who were instrumental in buying land on the east side of Burnhamthorpe Rd. (just north of Dundas St. W.) to build a new church that was completed in 1949. The previous church was located just around the corner on the south side of Dundas St. W., east of Cordova Ave. Alexander was also active on the building committee, tasked with the selection of the architect and approving the building design for the new church. He was on a similar committee several years later when a chapel, church offices and Sunday school rooms were added. Doug Loblaw took part in the “turning of the sod” in 1953 to mark the beginning of the construction. 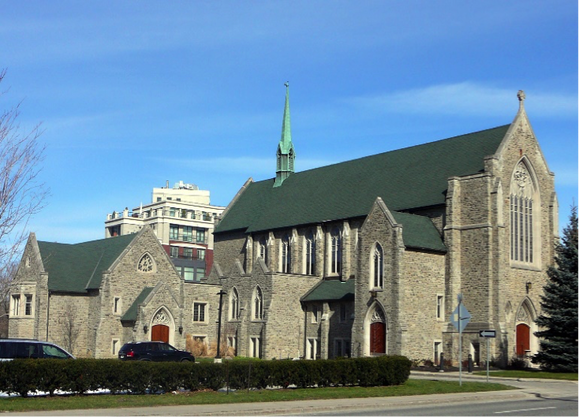 Islington United Church in 2016 (completed 1949).
Some of Doug’s early remembrances of growing up at 66 Burnhamthorpe are of his older brother Ted and other boys in the neighbourhood playing “Cowboys and Indians”, mostly on the large Loblaw property. In the winter they played road hockey on Mattice Rd.

Once his brother Ted married and left home, it took Doug a couple of hours to cut all the grass on the property by himself, including the 300 foot long strip along the boulevard fronting Mattice Rd.  There were many large maple trees on the property (some of which still stand today). In the fall there were vast carpets of leaves to rake and then piled in the deep ditch along Burnhamthorpe. The normal practice was to burn the leaves, which would require tending for hours on end.  As a result, the air In Islington was filled with the wonderful smell of burning leaves every fall.

Most local children went to Islington Public School, while Catholic children went to Our Lady of Sorrows School on Montgomery Rd. Doug remembers learning that the first school in Islington was originally held in a small building on what is now the 66 Burnhamthorpe property. This was a temporary measure while the first Islington School was built on Dundas St. just west of the Islington Burying Ground in 1832. 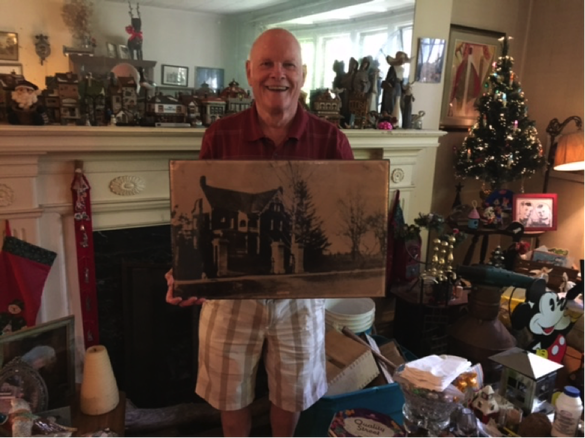 Doug Loblaw visiting 66 Burnhamthorpe in 2015 for the first time since 1966.
Doug eventually attended Etobicoke Collegiate Institute where he met his wife-to-be, Suzanne Jackson. They were married in 1965 at Islington United Church. After graduating from the University of Toronto with an arts degree, Doug got a job as a sales representative with Scott Paper Limited, assigned to service all the Loblaws stores in Southern Ontario.
​
Doug and Suzanne later moved to North Vancouver, B.C. where he became Product Manager at the head office of Scott Paper. In 1976 he left Scott Paper and taught marketing at Capilano College/University for 28 years.