There is a heritage house on Kipling Avenue, south of Dixon Rd., that is regularly missed when people drive by, perhaps because that stretch of Kipling, for the most part, only shows the backyards of houses. However, a closer look will reveal a gem of an historic house that faces Kipling and was built by a family that owned the property for 152 years.

The house was originally part of 100-acre Lot 20, Concession A, which ran from Islington Avenue to Kipling Avenue, the second lot south of Dixon Road.
​
The original land owner in 1801 was 10 year old Leah Tyrer Gamble, daughter of Captain John Gamble, surgeon of the Queen’s Rangers. The Captain received free land for himself, his wife and each of his 13 children. Leah herself received several lots in Etobicoke and they were rented out as investments. In 1809, Leah married William Allan, a Toronto businessman, judge and politician who was 21 years her senior. Ownership of Leah’s properties immediately passed to her husband, and in 1836, Allan sold Lot 20 to Thomas and Elizabeth Dixon. 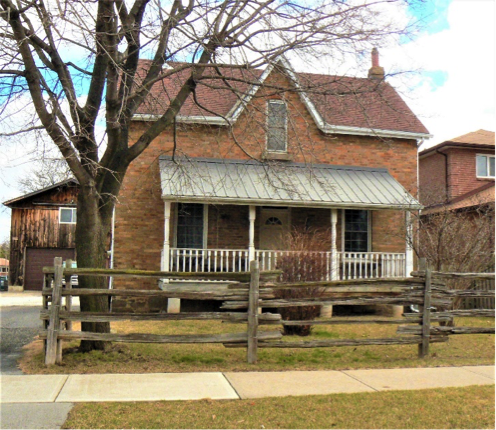 Edwin & Ellen Laver Farm House - Built 1897
The James Dixon family – after whom Dixon Road is named – immigrated from England to Ontario in 1818, initially settling on the Colonel Talbot Tract in Elgin County before moving to Etobicoke in 1826.  James would eventually father 15 children with his three wives. The male children settled on several different lots north and south of Dixon Road.

Elizabeth died in 1851, likely in childbirth. In 1852 Thomas married Ellen Caslin who had been born in Ireland in 1824. They had two children together: Thomas Jr. born 1853 and Ellen Jr. born 1854. Thomas Sr. died in 1856. In his will he left his wife Ellen three acres of Lot 20 by Islington Avenue where the original family home was located, for her use until her own death. His son Thomas Dixon Jr. was bequeathed the east half of Lot 20, excluding the house. His daughter Ellen Dixon Jr. was given ownership of the west half of the property which had no dwelling on it. Thomas Jr. and Ellen Jr. were only three and two years old respectively at the time their father died, and they continued to live with their mother in the family home that faced Islington Avenue. Their mother died in 1887.

Ellen Dixon Jr. married Edwin George Laver whose family had immigrated from England ca. 1882. According to John Laver, the grandson of Edwin Laver, the house at 1671 Kipling was built in 1897 on Ellen’s half of Lot 20. It is built in the simple Gothic Revival style that became so popular in rural areas that it became known as “Ontario Gothic.” It has a centre hall plan with one and a half storeys, and a typical Gothic peak over the front door with a veranda across the front of the house.

Ellen passed away in 1916 and Edwin in 1920. Their son Roy, inherited the property and farmed the land in Etobicoke with his wife Esther until about 1960 when they moved to Caledon East. Roy died there in 1975 and his wife died shortly after.
​
In 1988, John Laver put the house at 1671 Kipling up for sale and it was purchased by a family that has owned and cared for the house ever since.  This house is listed on the City of Toronto’s heritage register and it is the last remaining home in Etobicoke to have been inhabited by a descendant of the Dixon family.