Lambton Mills Named for the Earl of Durham 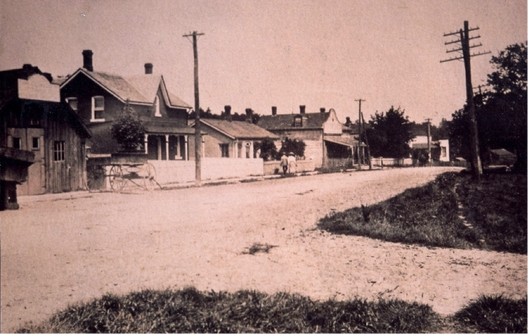 Dundas Street West in the Village of Lambton Mills, looking east towards the Humber River from Perry Street (now Earlington Avenue) ca. 1910. (Courtesy: Montgomery’s Inn)
This tranquil view of Dundas Street ca. 1910 provides a sharp contrast to the Dundas Street we know today. Not a single vehicle disturbs the peace for the lone couple strolling eastbound in the centre of the photo.

Lambton Mills was an important early milling community that straddled the Humber River at Dundas Street. In 1807, William Cooper had built a grist mill on the east bank of the river and a village called Cooper’s Mills grew up along Dundas. The first post office in Etobicoke Township was called “Etobicoke”, and it opened just west of the river on Dundas Street in 1832, with Truman Wilcox as postmaster.

In 1840, William Pearce Howland – a future Father of Confederation – leased Cooper’s Mills and renamed them Lambton Mills after John George Lambton, Earl of Durham. For a long time, the name Lambton Mills applied to the village on the east bank of the river only. The village on the west bank was called Milton Mills – the name of William Gamble’s mills at Bloor Street - because Gamble had opened a general store in the village on Dundas Street in 1841. By 1864, Etobicoke Township had several post offices, so the “Etobicoke” post office name was retired and this village’s post office officially became “Lambton Mills”, serving both sides of the river.

In this 1910 photo, you can see Dundas Street curving towards the south as it starts its descent to the low level bridge that crossed the Humber River.  In 1929, that bridge was replaced by the high level bridge on Dundas that we use today.

In 1910, the population of Lambton Mills was about 600.  It had four churches, four stores, two hotels, two blacksmiths, one carriage factory, two telegraph offices and two express offices. Left to right, the buildings in the photo are: George Chapman’s blacksmith shop; Thomas Coulton’s residence; Charles Ware’s residence; Charles Ware’s general store (this is the general store built by William Gamble in 1841); and Thomas Coulton’s blacksmith shop. All of these buildings are gone except one: Thomas Coulton’s house still stands at 4146 Dundas Street West and is listed on the City of Toronto’s Heritage Register. Sadly, the stillness we can imagine while looking at this photo has gone forever.