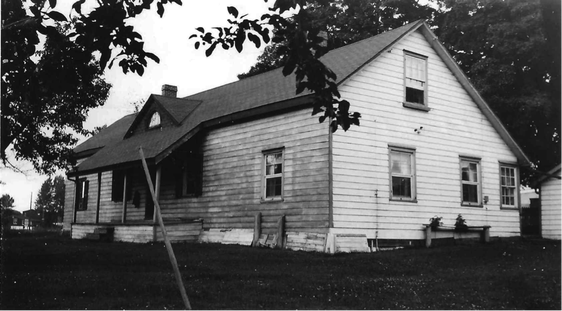 Lieutenant Colonel Samuel Smith’s 1797 home, just prior to demolition in 1955 to build a parking lot (Courtesy: Etobicoke Press)
Over the years, we’ve seen the loss of many heritage buildings, and while each is a tragedy, many feel that the loss of the house in this photo is the most lamentable we’ve seen in Etobicoke. At the time of its 1955 demolition to build a supermarket parking lot, it was the second oldest house in Toronto, built in 1797. Yes, it was a plain and simple house, in need of some TLC, but with lots of history to tell. It was located in what today is the schoolyard behind St. Josaphat Catholic School on 41st Street in Long Branch.

The home’s original owner was Lieutenant Colonel Samuel Smith, who had served in the Queen’s Rangers under John Graves Simcoe. Smith became a civilian in 1798, and in 1799, at age 45, he married 20 year old Jane Isabella Clark and they had 11 children. In 1815, he was appointed to Upper Canada’s Executive Council, and then served as temporary Administrator of Upper Canada in 1817-18 and 1820.

Smith was granted 3000 acres of land for his military service, including 2600 acres in Etobicoke from Kipling Avenue to Etobicoke Creek, and from Bloor Street to Lake Ontario. Smith’s house was initially a four room log cabin built of pine timber, dovetailed at the corners and secured with hickory pegs. Its floor was made of pine boards cut 2” thick and 14” across. He soon added two rooms to each end of the cabin and covered the exterior with siding. Smith built a saw mill on Etobicoke Creek and bred horses, but does not appear to have had any skill at farming. He possessed a surfeit of social status and land, but his income as a half-pay officer was too low to develop his vast estate. Jane Smith died in September 1826, and Samuel Smith a month later. Their destitute children petitioned and received a monetary grant from the government. The family left most of the Etobicoke land unused well into 19th century. The house was taken over by squatters and quickly deteriorated.

In 1861, James and Margaret Eastwood purchased the old house and 500 acres of lakefront property, which they farmed. In 1883, they sold 50 acres to a consortium which developed it into a successful summer resort area called Long Branch Park. In 1920, Eastwood sold the rest of his land for more cottage developments, retaining six acres around the house. Its last resident was the Eastwoods’ great-great-grandson, Robert Christopherson, who had been born in the house in 1880.