The Award was presented to the late Herb Jones and Police Constable James (Jim) Crawford for their heroic deeds during Hurricane Hazel.

Prior to the presentation by Steve Pitt, author of "Rain Tonight" a book on Hurricane Hazel, Nicholas Doran, Past President of the Etobicoke Historical Society addressed the meeting. Mr. Doran advised of a conversation had taken place with Mr. Jim Crawford, a Toronto Police Constable at the time, who during Hurricane Hazel on the 15th., of October, 1954 along with Herb Jones and Herb's outboard motorboat made over 20 harrowing trips during five hours, bringing more than 50 people to shore and to safety.


As a result of this conversation with Mr. Crawford, it was learned neither Herb Jones nor Jim Crawford were ever recognized for the valiant efforts during Hurricane Hazel.  The Board of the Etobicoke Historical Society was about to change that.  Mr. Doran called upon the Society's President, Gregory Wowchuk to make a very special plaque presentation to Jim Crawford. 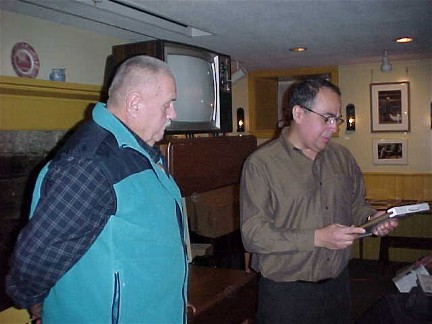 Reading of the plaque, on the occasion of the 50th Anniversary of Hurricane Hazel. "Canada's Storm of the Century" to Jim Crawford.
Following the presentation to Jim Crawford, President Wowchuk called upon Mrs Herb Jones to come forward along with Mrs Marsha Kennedy, daughter to receive a plaque presented postumously to husband and father Herb Jones. 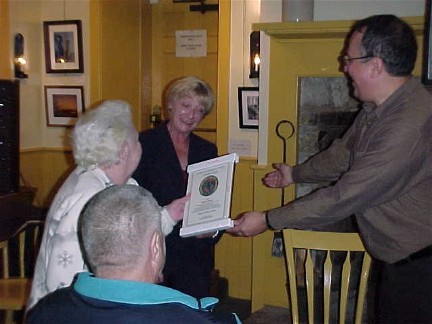 Mrs. Jones receives the award for Herb Jones.
Following the presentation by Steve Pitt, he responded to questions from those gathered.  The President thanked Steve Pitt for an excellent presentation presented him an honorarium as a token of thanks along with a membership to the Etobicoke Historical Society. 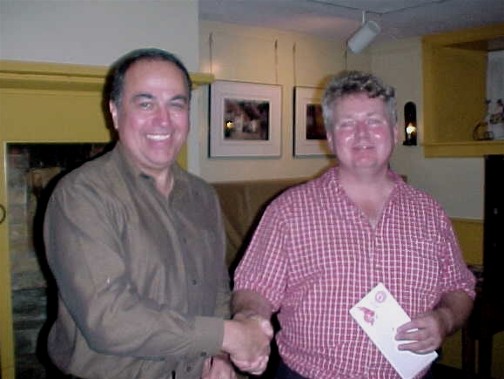 Thanking Steve Pitt.
President Wowchuk related his own experience and advised he too was a Hurricane Hazel baby.  Mary, his mother, a 29 year old had exited a streetcar, and trudged through water halfway up to her knees to walk another half a mile home.  She felt ill, but went on to a girlfriend's home, her labour pains started.  The baby was not due for another month.  She was taken by her husband to the hospital,  where on October 18th., 1954, Gregory Wowchuk was born by caesarean.

The Etobicoke Historical Society regrets to advise of the passing of Mr. Jim Crawford on Tuesday, June 9th., 2009 in Keswick, Ontario.