One former business that holds a lot of memories for people who grew up in the Richview area of Etobicoke is Bert’s Turkey Palace.  This restaurant was located on the north side of Richview Side Road (now Eglinton Avenue West), east of Highway 27.  Both the restaurant and its owner, Bert Hedges, are long gone now, but Bert is remembered in an Etobicoke street called Hedges Boulevard that runs east off Martin Grove Road, two blocks south of Eglinton.

Over the years, I’ve received many calls from people looking for information on Bert’s Turkey Palace.  The only photos known to exist are 1961 aerial shots of the intersection in the Ontario Archives. Callers have fond memories of stopping at Bert’s for the great turkey burgers and milkshakes after school dances.  But Bert’s was much more than a burger joint.  He advertised that he sold “Turkey Anyhow”, and indeed you could buy turkey live, dressed, custom cut, or pre-cooked. He also sold chickens, geese and ducks – all raised and prepared on his adjacent farm. 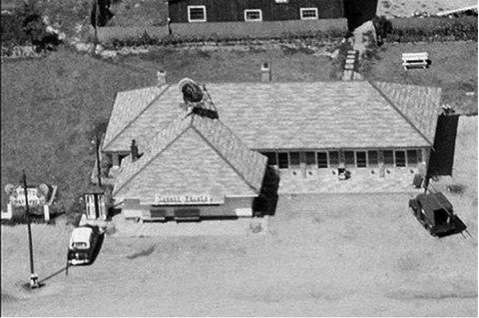 Bert’s Turkey Palace in 1961 looking north. Note the large turkey sign on the roof.
Albert “Bert” Gladwin Hedges was born in York Township in 1898. He married Gerilda Bell McCullough in 1921 and they had one daughter.  Bert started his career as a bookkeeper, but went on to work for over 20 years as a referee for the Ontario Hockey Association and the NHL.

Around 1945, the Hedges bought a 50-acre farm on the northeast corner of Richview and Highway 27. At the south end of this property, they built a family home overlooking the Mimico Creek valley, a restaurant, and assorted farm buildings, all of which can be seen in the following photo:

Bert also devoted time to his other major interest: horse racing. Three horses bred on his farm were named Bronze Turkey, Silver Turkey and Gold Turkey, this last one being a two-time stakes winner.

Bert died in 1965 at the age of 66 at his home on Richview Side Road. Gerilda died in 1974, and they are buried together in Park Lawn Cemetery.

After Bert’s death, the Hedges’ property was demolished in 1967 to make way for a reconstruction of the Highway 401/427 interchange.  Today, the former site of Bert’s Turkey Palace lies under a highway ramp near Eglinton and Highway 427.