Growth of Suburbia in Northern Etobicoke 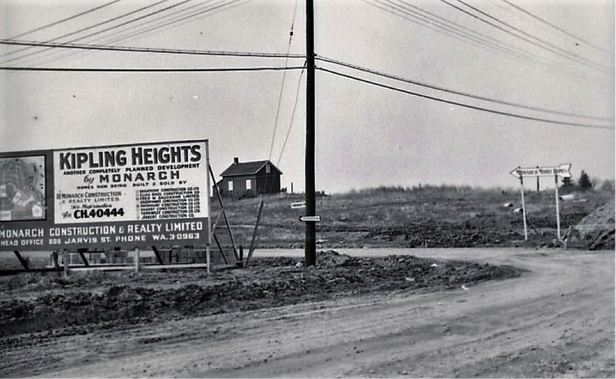 Sign on southwest corner of Islington Av. and Fordwich Cres. advertises the new Kipling Heights subdivision in 1955. (Toronto Public Library)
​It could be said that this photo epitomizes the massive transition in land use from farming to suburbs that took place in Etobicoke after World War II. In this photo, a former farmer’s field lies fallow, and what was once a farm residence sits empty, its windows boarded up. Dominating the scene is the large billboard of Monarch Construction, advertising its new Kipling Heights subdivision. The following year, Thistletown Collegiate will be built on the empty field.

Kipling Heights lies between Islington and Kipling avenues, running north from about Elmhurst Dr. to the West Humber River.  Monarch Construction and Realty Limited purchased farmland totalling 450 acres (185 ha) from Percy and Andrew Barker for $1.8 million.  Between 1956 and 1958, Monarch, with the help of eight partner construction companies, built new houses over the entire area.
The architectural style of the houses in Kipling Heights is now generally called “Mid-century Modern” because it hit its peak in popularity during the 1950s and 1960s in subdivisions across North America. However, at the time, many called this style “Contemporary” or “Contempo”.

With a postwar upsurge in the economy, families were quick to embrace an architecture suited to all of the modern conveniences now available, such as refrigerators, electric stoves and continuous counter tops. Building products that had been restricted during the war were now available: steel, aluminum, a variety of surface finishes, and large sheets of glass for “picture windows.” Fireplaces were common with centred chimneys at the front or rear of the house. Rooflines often had an off-centre peak, with a slope that extended further on one side of the house to incorporate a carport or garage, perfect for “the family on the go.” An inverted wing or “butterfly” roof with an off-centre “V” was often seen as well.
​
In the above photo, at the far right there is an arrow directing potential buyers to the model home at 66 Fordwich Crescent. “The Cambria” was advertised in the Toronto Star as a “dramatic tri-level house” that was “furnished by Simpson’s Interior Decorating Department to compliment this design.” The decorator had provided bright orange and chartreuse touches in the living room – a color scheme many of you will remember from that era. The house was listed for $15,660 with $4,000 down and a mortgage at 5 ½ per cent