The first time I heard the word “curmudgeon” was in 1957. While watching a new TV show on CBC called Front Page Challenge, someone on camera told panelist Gordon Sinclair that he was one! I was only 11 years old, but I already loved the show and particularly loved Sinclair who fascinated me with his brash, blunt and rather crabby demeanour. After asking my Dad what the word meant, I knew that “curmudgeon” suited him perfectly!

I soon found out that Sinclair lived in Etobicoke, quite close to me. My parents’ house overlooked Islington Golf Course from the north, while his overlooked it from the south. Our Etobicoke connection, coupled with his “interesting” personality, made me a huge fan.

Gordon Sinclair was born in 1900 in Cabbagetown to parents who had emigrated from Scotland. In his first year of high school, he dropped out and took a job with the Bank of Nova Scotia. He was soon fired – something that was to become a pattern with him. He then got an office job at Eaton’s. During World War I, he served part-time in the 48th Highlanders of Canada militia. Eaton’s eventually fired him and he then found employment as a junior bookkeeper at Gutta Percha Rubber where he met Gladys Prewett and married her in 1926.

In 1922, Sinclair applied to four Toronto newspapers for a job as reporter and took the only offer he received – from the Toronto Star. He was given routine assignments for seven years before earning his first byline, but then he became one of their leading reporters.
In the years 1932 to 1934, he travelled to India, Southeast Asia, and Devil’s Island for the Star, writing best-selling books about those places after each trip. However, the Star fired him in 1935 for failing to get a story on the war in Ethiopia.  By then Sinclair had travelled 340,000 miles to 73 countries for the newspaper. (He would go on to write eight books during his lifetime.)

Sinclair found a new job, but three months later was rehired by the Star, this time as a sports columnist. The overwhelming consensus was that sports was not his forte, so a year later he returned to general reporting.

In 1942, Sinclair was asked by the radio station CFRB to do some shows on the Dieppe Raid. This moonlighting was discovered by his Star bosses soon after, and they fired him once again! 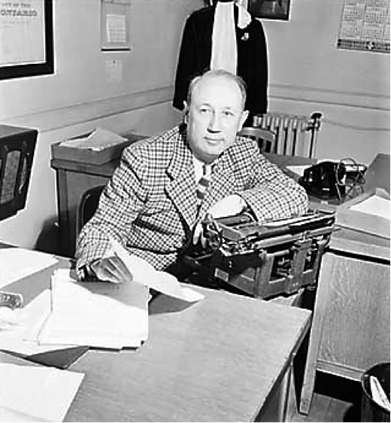 Gordon Sinclair on the job in 1947 (Wikipedia)
He formally joined CFRB and became part owner of the station. This association continued for over 40 years until his death in 1984. However, he also rejoined the Star as a freelancer in 1949 and continued there until 1962.

​In 1957, he was hired as a panelist on the new CBC television series Front Page Challenge. He held that position for 27 years. He initiated controversies throughout his time on the show, but that just seemed to make him more popular. He also never hesitated to talk about his many pet peeves, including water fluoridation, singing God Save the Queen, Medicare, and - most forcefully – religion. 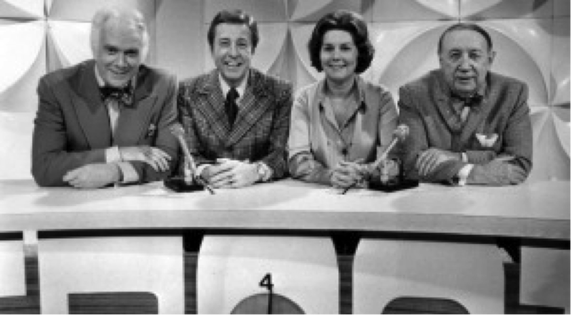 Cast of Front Page Challenge (L to R): Pierre Burton, Fred Davis, Betty Kennedy, and Gordon Sinclair
​Sinclair had invested his money well over the years and became independently wealthy. He lived in his beautiful house overlooking Islington Golf Course from ca. 1935 until his death. He and his wife, Gladys, had three sons: Don, Jack and Gordon Jr., the last of which also became a successful journalist. Sinclair loved cars, and after owning a Thunderbird, in 1961 he bought a Rolls-Royce, which he drove for 11 years. 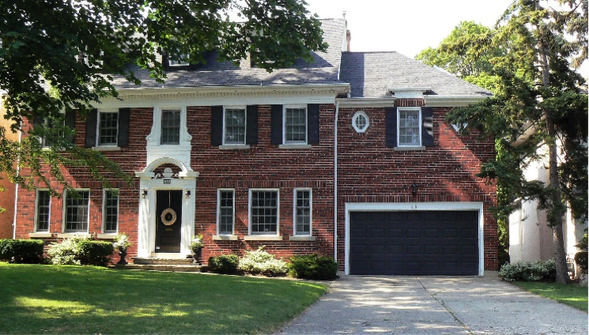 The Sinclair house at 35 Burnhamthorpe Park Blvd. (Photo D. Harris, 2017)
Over time, Sinclair developed his own “distinctive” style of dress which included plaid blazers and loud bowties. He especially loved wearing a kilt to celebrate his Scottish heritage. One colleague reported seeing him walk in one day in fawn trousers, purple sports jacket, pink shirt, yellow tie, and green porkpie hat with a red feather.

​Until his death, he was still doing 14 broadcasts a week and appearing on Front Page Challenge weekly. He died of a heart attack on May 17, 1984 at age 83. Tributes poured in from around the world. Sinclair had been made an Officer of the Order of Canada in 1979 and was posthumously enrolled in the Etobicoke Hall of Fame in 1985. He is buried in Park Lawn Cemetery.
Gordon Sinclair certainly could be controversial, and he definitely caused an uproar or two, but he was never boring! I think I liked him primarily because he provoked me – and all of us - to think. He was a curmudgeon, but he was OUR curmudgeon! 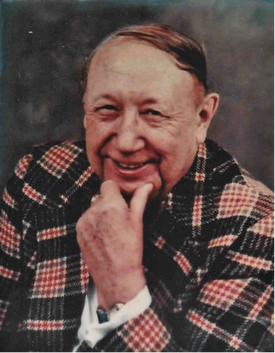 Gordon Sinclair in one of his signature plaid jackets ca. 1980
Readers may remember when one of Sinclair’s short radio commentaries became famous world-wide.  It became known as “The Americans”, became a best selling record, and to this day there are doubters from a younger generation that the piece actually happened.

From Snopes.com: “On 5 June 1973, Canadian radio commentator Gordon Sinclair decided he’d had enough of the stream of criticism and negative press recently directed at the USA by foreign journalists (primarily over America’s long military involvement in Vietnam). When he arrived at radio station CFRB in Toronto that morning, he spent twenty minutes dashing off a two-page editorial defending the USA against its carping critics which he then delivered in a defiant, indignant tone during his “Let’s Be Personal” spot at 11:45 AM that day.”

Some excerpts: “This Canadian thinks it is time to speak up for the Americans as most generous and possibly the least appreciated people on all the earth... You talk about scandals, and the Americans put theirs right in the store window for everybody to look at. Even their draft-dodgers are not pursued and hounded. They are here on our streets, and most of them are getting American dollars from ma and pa at home to spend here... I’m one Canadian who is damned tired of hearing (Americans) get kicked around. They will come out of this thing with their flag high. And when they do, they are entitled to thumb their nose at the lands that are gloating over their present troubles. I hope Canada is not one of those.”

When Ronald Reagan visited Canada in 1981, he thanked Sinclair for giving the U.S. a boost in one of its darkest hours.