Francis (Frank) Dawson “A Friend to All” 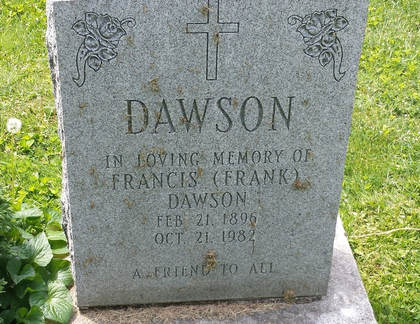 It wasn’t difficult to pull together a few facts about Frank. He was born in Kent, England in 1896 to Ernest and Louisa Dawson. He was the third of six brothers: Ernest, Edwin, Francis, Louis, Leonard and Walter. In 1912, the entire family immigrated to Canada and lived in Bloor West Village, first at 338 Beresford Av. and later at 385 Beresford Av. During World War I, Frank served overseas as a private with the Canadian Expeditionary Forces, along with at least two of his brothers. Frank managed to serve for two years from 1916 to 1918 despite experiencing several severe medical conditions requiring hospitalization: trench foot, trench fever, chilblains and tachycardia.

Frank’s father, Ernest, died of pneumonia in 1921. In 1926, his widowed mother, Louisa, bought a 6.6-acre property in Etobicoke at 75 Elmcrest Rd., south of Rathburn Rd. and backing onto Renforth Creek, a small tributary of Etobicoke Creek. Frank never married and lived with his mother until her 1944 death, when he inherited the property. In 1949, Frank sold two acres of his land to the Director of the Veterans Land Act.  Frank had a 40-year career with the CPR as a mechanic. He is listed in a 1965 voter’s list as a deputy conservation officer. He passed away in 1982 at Queensway General Hospital. His property was sold and subdivided into a new cul-de-sac named Esposito Court.

Those are the basic details of Frank’s life. But the “Friend to All” is still hard to find amongst the facts.

I first heard about Frank from Jill Berni, EHS Archivist. Jill’s mother, Helen Hodges, knew Frank personally and was the key to understanding more about him. Helen would rescue birds from neighbourhood cats and take them to Frank for help. She recalled a long dirt road to get to his little house. He had quite the menagerie there – a duck with one leg, a chicken with one wing, and so on. He kept a number of cats and Helen asked him if the cats ever went after the birds.  He replied, “Never! They know better!”  A very reclusive but kindly old man, he lived simply, using only a pot belly stove for heat. After he retired from the CPR, he worked for Etobicoke as a Deputy Conservation Officer in nearby Centennial Park, a job he loved as it kept him close to nature.

Jill gave me a 1978 Toronto Star clipping about Frank that Helen had saved. It noted that he was known affectionately as “Uncle Frank” in the neighbourhood. He had been patching up injured birds for the entire 50 years he had lived there. He also kept guinea hens, chickens, domestic ducks and geese, a snow goose and a couple of goats.

Helen had kept one additional clipping - an obituary written for the Etobicoke Guardian at the time of Frank’s death:

Etobicoke this week lost one of its “Old Timers”. Mr. Frank Dawson of Elmcrest Road was laid to rest at St. George’s on the Hill in Islington.
He was a walker – never drove a car. He worked for more than 40 years for the railway in west Toronto.

A favourite saying of Frank’s was, “Punctuality is the soul of honour.” He was never late. You could set your clock by Frank Dawson.
Children loved “Uncle Frank” – he was their Bird Man.

Any Scout, Guide, Cub or Brownie who asked him for help with their nature badge work would be assured of passing with honours.
It can truly be said the only time Mr. Dawson raised his voice would be to challenge anyone harming a nesting mallard or ducklings.
In winter months his goat pasture on Elmcrest Road was a favourite spot for little ones and parents to enjoy a toboggan slide down his safe little hill, watched by a curious family of goats wondering at the antics of humans. Gifts of clover honey from his bees and fresh eggs were a treat indeed.

It is said that one can judge a man by his books. Uncle Frank liked to read. His favourite magazine was National Geographic. During the last two years when he was no longer able to walk very far, he re-read the books he treasured over the years.

He loved music, rising at dawn to see the sun come up, and country fairs. He didn’t much like new clothes or fancy “vittles” – plain food eaten on a picnic in the great outdoors was a banquet to him.

He never failed to spot birds in flight and cared for them in distress.

Mr. Frank Dawson, along with his brothers, served as soldiers in the Great War. King and Country meant much to him. You were never a fighting man, but you fought a good fight in your gentle way.

Today we salute you and say, “Well done. Rest in Peace.”

You were respected by many, a good friend to all who knew you. You will be sadly missed.

Now we can see why Frank was called “A Friend to All.” I wish I’d known him, too.
﻿
Researched and Written by Denise Harris.
View More People