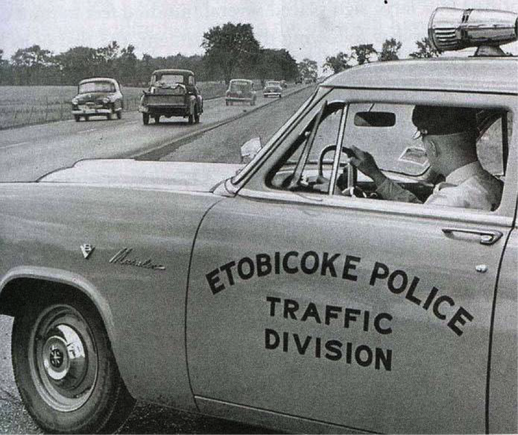 It’s 1952, and traffic is light along Malton Road – now Rexdale Boulevard – as one of Etobicoke’s traffic constables watches for infractions from his seat inside one of the Township’s Ford Mainline police cars. Amazing as it seems today, up until the 1940s Etobicoke only had eight constables and two patrol cars for its entire area. By 1950, Etobicoke had three traffic officers, a detective department consisting of two detectives and six plain clothes officers; six accident investigators with yellow cruisers; five cars with radios; and one motorcycle. The police station was located on the lower level of the Township Hall at 4946 Dundas St. W. in Islington village, where a sign etched in stone on the east side of the building still says “POLICE”. (Courtesy: John  Maniezzo)