The story of Edward Scarlett’s house starts with his father, John Scarlett of Newcastle, England who arrived in the Town of York in 1808 with “a considerable fortune.”   Readily accepted as a member of the affluent, Tory, Anglican upper class, he was  able to obtain a position as Chief Clerk in the Inspector General’s Office, a position he held until 1828. In 1810, Scarlett married Mary Thomson, daughter of UEL Archibald Thomson who had received a 1000 acre land grant in Scarborough, further solidifying his position in society. He and Mary had four sons and two daughters: Edward (b. 1811), Mary (b. 1815), John (b. 1819), St. George (b. 1820), Elizabeth (b. 1823), and Samuel (b. 1826.)

As early as 1809, Scarlett began purchasing timber land along the Humber River.  By the 1830s, he owned a lumber yard, grist mill, saw mill, planing mill, distillery, lumber store and brickyard in Etobicoke and York Townships.  By 1860, Scarlett and his four sons owned all of the land along both sides of the Humber River between Dundas Street and the Town of Weston. Three of the sons owned houses on the Etobicoke side of the river near Eglinton Avenue West, and the road that ran through the Scarlett properties is still called Scarlett Road to this day. 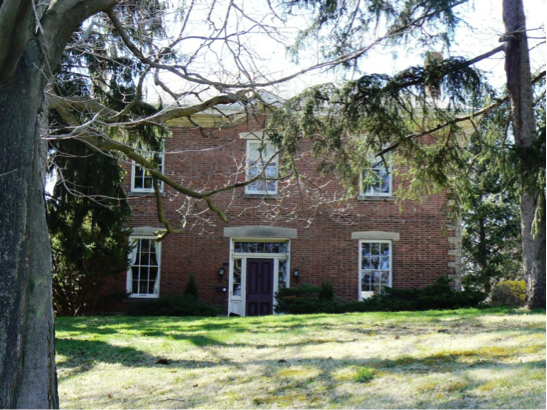 This house is considered an excellent example of vernacular architecture in that it is not likely the work of an academically-trained architect, but rather represents the work of a highly skilled craftsman with extensive experience in his trade. With its hipped roof, square and symmetrical facade, large chimneys, and front door with a transom light and two sidelights, it is essentially a Regency design – a style more popular in the 1820s/30s. However, the house also has 1850s/60s Italianate features, such as paired brackets decorating the extra-wide boxed cornice and a door and windows with curved stone lintels. The house also has a small Gothic-style gable with a low pitch that breaks up the straight roof line. It is highly likely that some of the woodwork in the house came from Scarlett’s own mill.

By 1874, Edward and Samuel retired from business and sold their saw mill.  Edward moved to Adolphustown near Kingston where he lived with a sister and later her daughters until his death in 1894. His property passed through several owners until it was bought by Lorne LaRush in 1934. After World War II, LaRush began to subdivide the property, building one large house for himself on a new street and preserving Edward Scarlett’s house at 15 LaRush Drive. By 1977, the house was owned by Cyril Chase who subdivided the two acre property into three lots.  A new cul-de-sac was created and the address of Edward’s house changed to be 1 Heritage Place. Today this well-preserved property is listed on the City of Toronto’s Inventory of Heritage Properties.