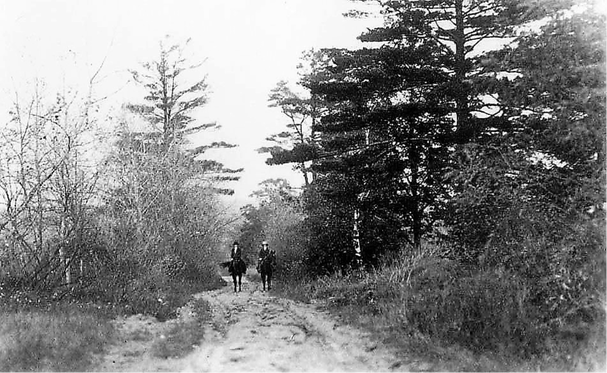 Horseback riders in Park Lawn Cemetery ca. 1920 (Montgomery’s Inn)
With over 100,000 interments and 73 acres (30 ha) of lightly rolling land, Park Lawn Cemetery on Bloor Street at Prince Edward is the largest cemetery in Etobicoke, and the fourth largest in Toronto.  Only Mount Pleasant, Pine Hills and Prospect are larger. Park Lawn’s extensive tree canopy and beautiful stone grave markers fit in well with the nearby Humber River Valley and the beautiful homes in the surrounding neighbourhoods.

When the cemetery opened in 1892 on 50 acres (20 ha) of land, it was called Humbervale Cemetery and was funded by the sale of shares. Many of the shares were held by local farming families who are now buried there. In 1912, the cemetery was sold to a party who promised the graveyard would be maintained. However, it was soon discovered that he actually intended to turn the land into a residential subdivision, moving some of the existing graves to different locations on the property. Some of the former shareholders formed the Humbervale Cemetery Defence Association and took the owner to court. After appeals on both sides, the case ended up in the Supreme Court where the former shareholders were victorious. In December 1915, the cemetery was purchased by a new company that renamed it Park Lawn and vowed to maintain it as a cemetery in perpetuity.

An exploration of the grave markers reveals a veritable “Who’s who” of Etobicoke history. From the field of politics the graves include York mayor Fergy Brown, and MPP John McBeth. Dr. Alan Roy Dafore is buried there, as are musician Jeff Healey, artist Carl Ahrens, journalist Gordon Sinclair; and Kingsway developer Robert Home Smith. Especially notable are the many graves of sports figures including Conn Smyth, Lou Marsh, Harold Ballard, Gus Ryder, Butch Keeling and Lou Cavalaris. There are also 96 war graves of Commonwealth Service Personnel from World Wars I and II.

Two unique but forlorn plots worth attention hold the unmarked graves of 75 British Home Children who were brought to Canada under the auspices of Dr. Barnardo’s Homes, one of several British charities that did such work between 1863 and 1949. In total about 110,000 orphans were placed with Canadian families. Many were treated well, but some received nothing but abuse,. The plots in Park Lawn are owned by Barnardo’s, which now helps relatives to reunite families by offering information on these children. Many of the graves have now been identified and a large marker has been erected which can be seen on-line BY CLICKING HERE.

Cemetery management encourages visitors to stroll through this tranquil corner of the world. Many come to enjoy the wildlife, from the deer that make their way up from the Humber River valley to foxes, opossums, coyotes, racoons, chipmunks, squirrels and countless birds. Others pick a shady spot to read and relax in peace.