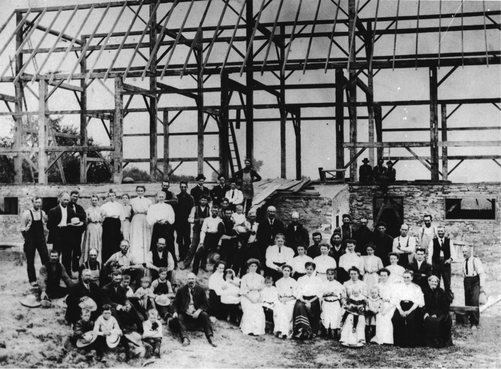 Barn Raising Bee at Oliver Dixon’s Farm in July, 1908. Oliver stands near the centre of the photo in a white long-sleeved shirt, with his right hand on his thigh. His wife Elizabeth is the furthest left of the five women standing in a row at the rear left of the photo. (Courtesy: Montgomery’s Inn)
Neighbourhood “bees” have always been part of Ontario’s agricultural heritage, and Etobicoke was no exception.  They were survival strategies at a time when many tasks required more hands than one family could supply on their own.  Bees were held for harvesting, threshing grain, pulling flax, clearing forest, making quilts and, of course, raising barns.

Building a large frame barn required as many as 60 to 100 men to lift the bent frames into place. The whole community would anticipate an upcoming bee as a major social event, with the women supplying an enormous feast after the men’s labours.   In July, 1908, Oliver and Elizabeth Dixon hosted a bee to raise a large new barn on their 100 acre farm on the southwest corner of Martin Grove Road and Dixon Road.   In the above photo, erection of the bent frames has been completed, and the group is ready for the fun part – dinner and socializing! 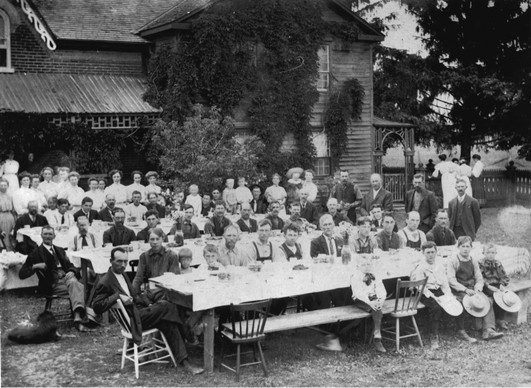 See if you can find Oliver and Elizabeth in this photo, too. (Courtesy: Montgomery’s Inn)
Oliver was the grandson of James Dixon, who had emigrated from England to Canada prior to 1827 and settled in Etobicoke.  James purchased the property shown in these photos in 1836.  His son Richard inherited the lot in 1860, and Richard left it to his son Oliver in 1882.  Thomas, another of James’ sons, built a house that still stands at 1671 Kipling Avenue, south of Dixon Road.  Jonathan, a third son, owned a lot just north of Dixon Road.  Many of James’ descendants farmed along Dixon Road, until the post-war development boom replaced farms with suburbia.  Dixon Road was named after this early Etobicoke family, a reminder of the area’s once-thriving agricultural history.