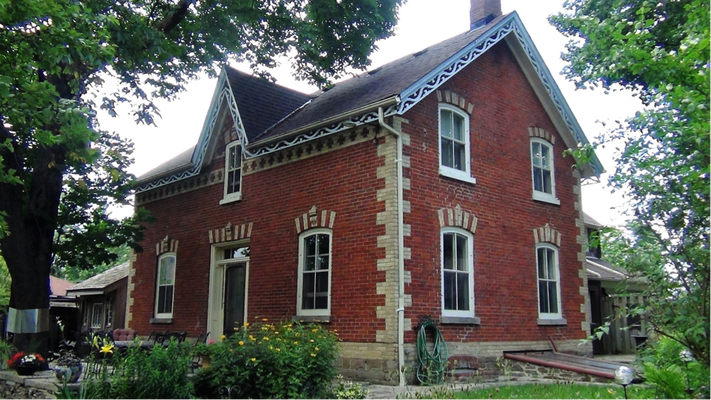 The west-facing front of Robert and Ann-Jane Coulter’s 1874 farmhouse at 112 Ravenscrest Drive in 2017 (Source: V. Vaccarelli)
Ravenscrest Drive starts at Rathburn Road and winds its way north, through the Glen Agar neighbourhood. Driving its route, you will pass two heritage houses at 98 and 112 Ravenscrest. If they look somewhat different from other farmhouses you have seen, it may surprise you to learn that you are actually looking at the original rear of each house.
Robert Coulter’s family settled in Etobicoke in 1822. Robert bought 40 hectares of farmland in two parcels in 1842 and 1862. His property stretched from today’s Martin Grove Road to Kipling Avenue, in the second lot north of Rathburn Road. The west part of his property was in the Mimico Creek valley where they had an apple orchard and a cow pasture. Above this valley was high land where he, his wife Ann-Jane Patterson, and their 12 children all lived in a log cabin. The upper level of land was accessed by a river-stone paved laneway that started at the north end of the property (now Agatha Road) and followed the top of the ravine, connecting the house with other farm buildings. This lane was lined with chestnut and walnut trees, two of which still exist today.

In 1874, the Coulters built the new home pictured above. This charming Ontario Gothic house of red brick has gingerbread trim and finely-detailed yellow brick quoins, window arches and banding under the eaves. It was built facing west, overlooking the Mimico Creek valley (now Glen Agar Park) with its lovely view. They called their new home “Mount Pleasant.”

Robert passed away in 1888 and Ann-Jane in 1903. In 1909, their heirs sold the south 50 acres to Walter Death (pronounced Deeth), a grandson of the Death family who settled near Royal York and Norseman in the 1830s. Walter built the brick two-storey house that is now 98 Ravenscrest ca. 1912, the year he married Bessie Carr. His house also faced west, overlooking the valley, and is now painted white.

The Coulters’ farm lane along the ravine was shared with the Deaths, who farmed their property until retiring in 1945 and moving to Islington.

In 1953, the Coulter heirs sold all of their property to Norman Agar and to other developers, except for “Mount Pleasant” which was turned into a tenement house. As part of designing the new subdivision, a new street called Ravenscrest Drive was opened on the east side of both houses, making the former farm lane redundant.

In 1968, the house at 112 was sold out of the Coulter family, but nearby Nashland Avenue commemorates Willa Nash, the granddaughter and last descendant of Robert Coulter to own the property. The current owners of 112 Ravenscrest bought the house in 2001 and have done extensive restoration of this Provincially Designated heritage home. 98 Ravenscrest, a fine example of an unpretentious century-old farm house, was sold to a new owner in June, 2017 and its future is uncertain.