Christopher Holdenby - An Artist and a Soldier.

All items in the Society’s archives have a story.  Were the sherry glasses given as a wedding present?  Where in the world did the swagger stick come from?  It’s questions like these that keep Philip and me busy with research on the many items in the collection.

As we were accessioning items, one item in particular caught my interest.  It’s a pencil drawing of a young man, seated, and holding a basket. It was drawn by George Christopher Holdenby in January 1916.   Along with the drawing was an article from The Advertiser (now the Etobicoke Guardian) dated May 25, 1967, and papers containing family memories shared by Mrs. Arlene Holdenby-Butler, who is Christopher’s niece. 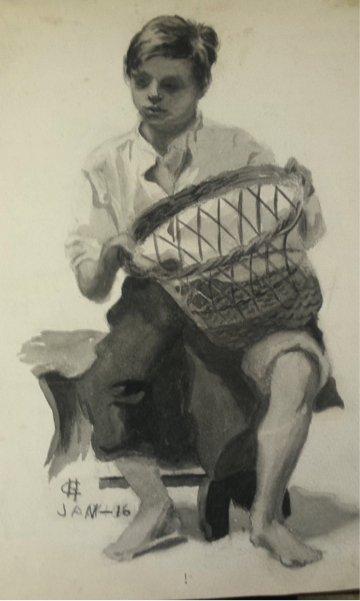 Holdenby pencil drawing.
Christopher, as he was known, was born November 5, 1890 in Islington to George William & Mary Ann Holdenby. The Holdenbys had 11 children, with Christopher being the eldest. The family moved from Islington to Mimico where Mr. Holdenby became the assessor for the Township of Etobicoke, and in 1911 became a member of the first Mimico School Board.

To his parents, Christopher was “the apple of their eye - a very quiet and studious boy. He was always described by the family as refined”, said Mrs. Holdenby-Butler.  He was a talented artist and musician, who taught himself not only to draw, but to play piano and violin beautifully.   By the time he was 20 years of age, according to the 1911 Census, Christopher was employed as a plasterer.

It was in August 7, 1917 that Christopher heeded the call from King and Country and joined the Great War.  In his Attestation papers, it says he was 5 foot 8” tall with brown hair and brown eyes and a medium complexion.  Although the papers state that one ankle was enlarged, he was declared fit for duty.

As a Sapper (Combat Engineer) with the Canadian Military Engineers, Christopher served in France for two years. It was during this time, according to his sister, Mrs. Gladys Holdenby-Harris, that Christopher’s mother received a scholarship to the Royal Academy of Arts in Toronto on his behalf. Mrs. Holdenby-Harris also said of the family “we feel that he would have been an outstanding artist.” During his time overseas, Mrs. Harris also states that “Chris was chosen bodyguard for King Albert of Belgium at Mons just before the Armistice.”

Sadly, on his way home from serving his country, Christopher contracted the influenza which was ravaging the population at the time. This gifted young man died in a hospital in Edinburgh, Scotland on February 25, 1919. Christopher was buried in Scotland, and is memorialized on the Mimico War Memorial in Vimy Ridge Park in Mimico. 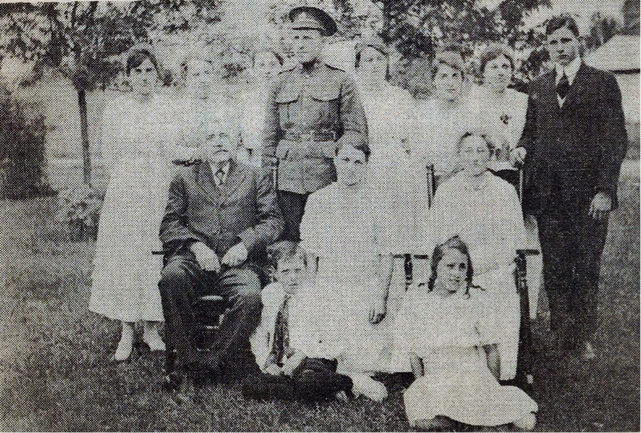 Holdenby family.
​In our small way, we are memorializing Christopher by writing a story about his life, but also by keeping his drawing in the collection.  You see, some of his family wanted to throw out the drawings made by Christopher and his sister Grace, another talented artist.  They considered it “junk”.  Luckily for our Society, Arlene Holdenby-Butler rescued the items and donated them to our collection, where they will stay to be enjoyed by all.