In 1802, Andrew Bigham was granted the west 64 acres of a 100 acre farm lot (lot 12, concession I) on the north side of today’s Rathburn Road, east of Martin Grove Rd.  In 1811, he married Mary Cleveland of Toronto Township.  Originally they lived in a log cabin on the property, but ca. 1840 they built a large 1½ storey house of riverstone on a hill overlooking the Mimico Creek valley.  The house is a “saltbox” style.  The open verandah that runs across the front of the house is covered by a bell cant roof.   The original front door has three panels, with a mullioned transom window above. The windows are all topped by stone radiating arches and have louvered shutters. The house still has its original fireplaces on the east and west walls. 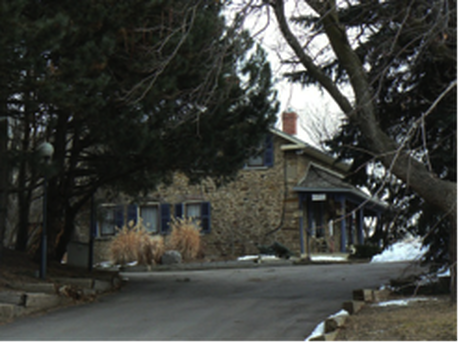 House built ca. 1840.
When Andrew died in 1843, the house passed to his son Samuel, who was born on the property ca. 1827. In 1849, Samuel married Eliza Ash.  In the 1850s, Samuel purchased the east 36 acres of the lot, so the property now ran east all the way to Kipling Av.  He also purchased 14 acres on the northwest corner of the lot to the south and built a large new barn (see second photo below.)

Eliza Agar died in 1911 at age 84, and Samuel died in 1917 at age 90.  As they had no natural children, the house was inherited by their niece, Mary Ann Bigham Agar, the widow of George Agar who had died in 1914.  George and Mary Ann’s son, William John, and his wife Ida were the next owners, followed by their daughter, Irene Agar McIlwain. Shortly after WW II, the property was sold, after remaining in the Bigham/Agar family for over 140 years. The land was developed into the Glen Agar subdivision. 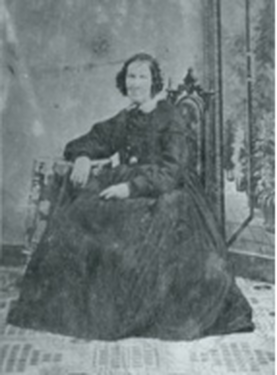 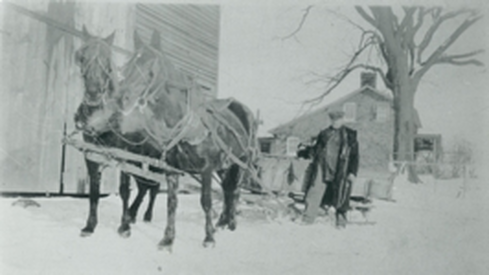 William John Agar with sleigh and horses ca. 1930-40. West side of house can be seen in background. (Source of above 3 photos: Montgomery’s Inn).
Researched and Written by Denise Harris
View More Places