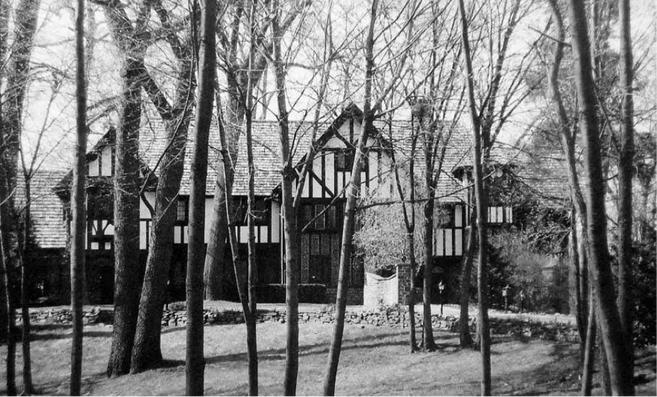 Robert Home Smith’s residence on South Drive (now Edenbridge Drive) in the 1930s. Source: Montgomery’s Inn Museum
Many of you will be familiar with the name Robert Home Smith, a brilliant and charismatic individual, born in Stratford in 1877. He had studied law at Osgoode Hall, but partial deafness prevented him from practicing this profession. Instead, he entered the land development business.

From 1906 to 1912, Home Smith assembled over 1200 hectares of land on both sides of the Humber River, between Eglinton Avenue and Lake Ontario. In 1912 he presented his vision to the public by offering properties for sale in his “Humber Valley Surveys”, including beautiful subdivisions we know today as The Kingsway, Riverside Drive and Baby Point.

Home Smith marketed all of his properties with the motto, “Angliae pars Anglia procul” or “A bit of England far from England.”  Each lot purchaser was required to sign a covenant that remained attached to the property for 30 years, ensuring that Home Smith’s high standards were maintained. House plans all had to be approved by one of Home Smith’s architects, with Tudor or English styles preferred. There were to be no semi-detached or multiple dwellings; only stone, stucco or brick could be used on exterior walls; and no home-based businesses were permitted except for doctors and dentists.

When it came time for Home Smith to build his own house, he followed his own rules. He selected a lot on a rise of land well-covered with mature trees at what today is 28 Edenbridge Drive. He hired Arthur Colpoys Wood as his architect, considered an expert in the Tudor and Elizabethan styles that Home Smith so admired. The rear of the house had a glassed-in room that overlooked the green acres of the Royal York Golf Course (now St. George’s Golf Course) which had just opened in 1930.

The house was built according to traditional English Tudor construction methods, using full frames of 23-centimeter oak timber, and then filling the brick and stucco in place afterwards. The main entrance had a massive oak door. The living room measured five meters by eleven meters and had a cathedral ceiling. There were 15 rooms over three floors, with accommodation for several servants. Home Smith named his home “Edenbridge”.

Smith only lived in his house for a few years as he died in 1935.  He left his entire estate, including the house, to his friend and business partner, Godfrey Pettit, who lived there until his own death in 1954.