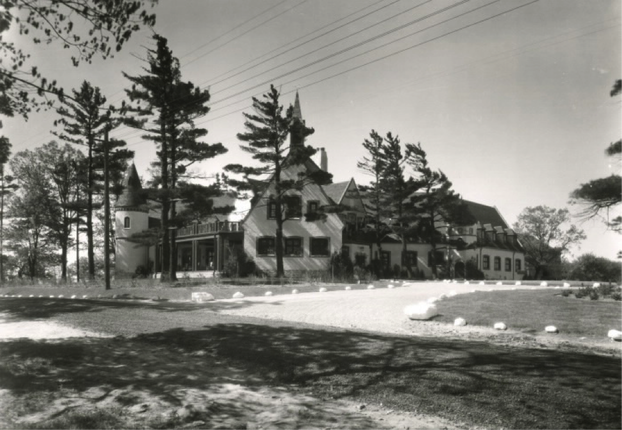 Clubhouse of The Royal York Golf Course, now St. George’s Golf and Country Club, as it appeared in its opening year in 1930 (Courtesy: Toronto Public Library)
Robert Home Smith is perhaps best known as the developer of some of the most beautiful subdivisions in Toronto, such as The Kingsway, Baby Point, and Riverside Drive.  But few people know that he was also responsible for the existence of one of the most scenic golf courses in Canada - St. George’s Golf and Country Club on Islington Avenue, between Eglinton Avenue West and The Kingsway.

In the 1920s, Home Smith was developing the 3000 acres of land that he had amassed along the Humber River valley when he began to feel the pinch of a slumping economy.  He conceived the idea that a golf course in the area would add sales appeal to his properties. At the same time, Sir Edward Beatty, a friend and president of the Canadian Pacific Railway, was building the Royal York Hotel in downtown Toronto. Smith convinced Beatty not only that this new hotel needed a golf club for its business guests, but also that the course should be located on a picturesque site that Home Smith already owned in central Etobicoke.

They entered into a partnership to build a golf course east of Islington Avenue and called it the “Royal York Golf Club” after Beatty’s hotel.  The new course was designed by renowned golf architect Stanley Thompson and opened in 1929.  A regular limousine service ferried hotel guests back and forth to the golf course.  A beautiful clubhouse was completed in 1930 on a hill on the west side of Islington Avenue in a French Chateau style, with Tudor Revival touches that matched the motto of Home Smith’s company: “A bit of England - far from England.”  Home Smith built a Tudor Revival mansion for himself at 28 Edenbridge Drive, backing onto the golf course. By 1931, Church Street, the road on the golf course’s eastern edge, had been renamed Royal York Road.

Home Smith died suddenly in 1935, and his executor and partner, Godfrey Pettit, inherited his entire estate.  Pettit was President of the golf club until his own death in 1954.  In 1946, the financial agreement between the golf course and the hotel expired, and the golf course became an independent corporation named St. George’s Golf and Country Club.

Today St. George’s is one of the top 100 ranked golf courses in the world, and was placed number one in Canada in 2012.  It has hosted the Canadian Open five times, most recently in 2010.