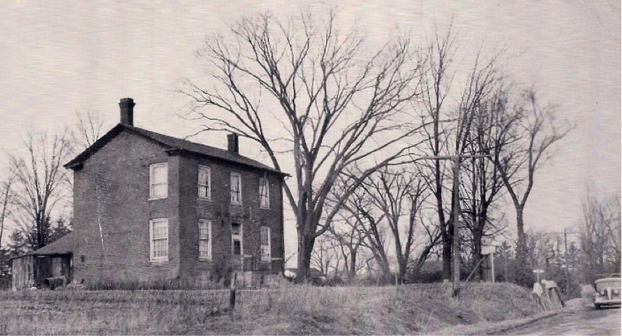 The Mercer house at 72 Old Burnhamthorpe Road, facing south, on the northwest corner of Elmcrest Road, in the late 1930s. [Courtesy: Montgomery’s Inn]
Clad in vibrant red bricks and standing on a knoll, the Georgian-style farmhouse of Samuel and Ann Mercer is as much a landmark today as it was when it was built in the 1820s. The three foot thick foundation is of local fieldstone and the bricks were made on site of red clay from a small creek adjacent to the house. This residence still has four fireplaces, wide pine plank floors, and double-hung sash windows, with panes in a traditional 12 over 12 pattern.

Samuel Mercer was the eldest son of affluent United Empire Loyalists Thomas and Susanna Mercer, who arrived from Pennsylvania in 1796 and are considered to be the first settlers in the York Mills area. Samuel married Nancy “Ann” Anderson in Toronto in 1811, and the newlyweds moved to the western edge of Etobicoke, purchasing 81 Ha of land between today’s Eglinton Avenue West and Old Burnhamthorpe Road. With additional land purchases of 81 Ha in 1813 and 59 Ha in 1825, the Mercers soon had one of the largest farms in Etobicoke.

Samuel and Ann had 11 children, although two died very young. Initially all five sons remained on the family farm, and at least two of their four daughters remained there after they married. After the 1850s, however, the children began to disperse, acquiring their own properties in Oxford, Huron and Grey Counties. Only one son, Seneca, remained on the home farm in Etobicoke until his death in 1910. Rathburn Road west of Renforth Drive was originally named Seneca Road after him. Elmcrest Road, which runs along the east side of 72 Old Burnhamthorpe Road today, was initially called Mercer Road.

Samuel died suddenly in 1830 at age 50, dictating his will from his bed on the same day he passed away. He left all of his property to his wife, rather than his eldest son, Thomas, which would have been a more common practice. However, the will was clear that if Ann ever remarried, the property would revert to Thomas. She remained a widow, and spent another 52 years in this home, dying at age 90 in 1882. Samuel and Ann are buried together in Dixie Union Cemetery in Mississauga.
​
Over the years, the property was gradually sold off and developed into residential housing and Centennial Park. The Mercer house was extensively and professionally restored by owners in the 1970s, and it has been protected by a heritage designation by-law since 1976.