The Thomas Mercer family were United Empire Loyalists who arrived from Pennsylvania in the 1790s and were the first settlers in the area of Toronto called York Mills. Their son, Samuel, married Nancy “Ann” Anderson in 1811, and they moved to the western edge of Etobicoke, purchasing 200 acres of land between Eglinton Av. and the Etobicoke and Mono Sixth Line Plank Rd., now called Old Burnhamthorpe Rd. 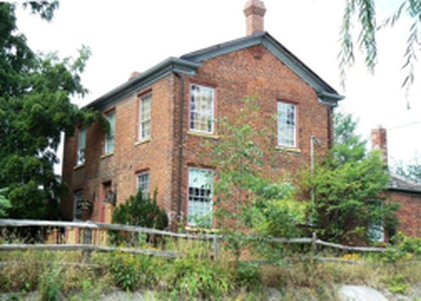 House built ca. 1820-30.
Samuel served in the York Militia during the War of 1812. In 1813 and 1825, the Mercers acquired 345 additional acres of land adjacent to their first property.  Initially they lived in a log house, but between 1820 and 1830, they built this large brick two-storey Georgian-style home.  The three foot thick foundation is of local fieldstone and the bricks were made on site of red clay from the small creek east of the house. The house has four fireplaces, double-hung sash windows, and wide pine plank floors.

Samuel and Ann had 11 children.  Samuel died unexpectedly in 1830 at age 50 and, unusually, his will decreed that his wife would inherit the house as long as she never remarried.  She never did, and spent another 52 years in her home, dying at age 90 in 1882. Samuel and Ann are buried together in Dixie Union Cemetery in Mississauga. The land was subsequently farmed by a series of new owners, but was gradually developed into residential housing and Centennial Park.  The house was carefully restored by former owners in the 1970-80s.