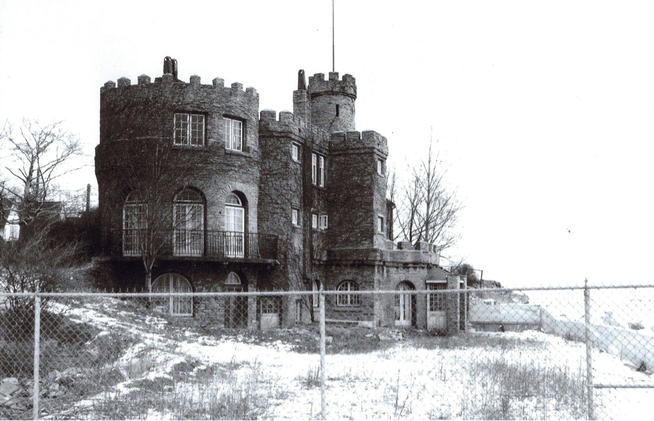 “The Towers”, a folly on the Fetherstonhaugh Estate on Lake Ontario in Mimico, immediately west of Royal York Road. Photo taken in 1955, just prior to demolition. (Courtesy: Toronto Public Library)
This mysterious building called “The Towers” once stood on an ominously-named point of land called “Thunder Head” that jutted out into Lake Ontario at the foot of Royal York Road. The point earned its name from the fierce thunder and lightening storms that frequently occured there. To me the name Thunder Head is symbolic of the anger and sadness that appear to have plagued the family that built The Towers.

In 1899 successful Toronto patent attorney Frederick Barnard Fetherstonhaugh and his wife Marion bought a large lot on the waterfront in Mimico for a summer estate. They named their new home “Lynne Lodge” after Fred’s mother’s Irish home. The house and a matching gardener’s cottage behind it were designed by popular Toronto architect Henry Sproatt in a sprawling Queen Anne style.

Fred and Marion had four children, but tragically three of them died young – two in accidents and one of illness. Only their eldest son, James, lived to adulthood, becoming an engineering expert in his father’s legal firm.

Around 1910, Fred built a “folly” [an expensive ornamental building with no practical purpose] resembling a Norman castle on Thunder Head. Marion spent many hours at The Towers painting lake scenes on crockery, and it was used as a guest house in summer. After World War I, The Towers was insulated and became a home for their son and his family when James returned from overseas.

Marion died in 1930 at age 63 and, in 1932, Fred married Audrey Emaygh of New York, an opera singer 32 years his junior. The marriage was short-lived and Fred lost most of his assets in the divorce settlement, including his law firm.

Fred became estranged from James, who had divorced his wife Jane to marry their housekeeper, and then reneged on his divorce settlement, leaving Jane and their children destitute. Jane had no choice but to return to her family in England with the children. Fred never forgave James and refused all future contact with him. Sadly, Fred never saw his grandchildren again.

When Fred died in 1945, his estate was valued at only $13,000. The house was sold and became the Lynne Arms Italian Village Restaurant for a few years. The folly was demolished in 1955. The house was torn down in 1957 and an apartment building erected on the site. However, the gardener’s cottage is still standing - a miniature version of Lynne Lodge hidden behind the apartment building. In 2011 the cottage was designated as a heritage property – a small reminder of the grand estate that once stood on that site.