Frederick Barnard Fetherstonhaugh (called Fred or “FB”) was born in Paisley, Ontario in 1863, and by 1871 his family was living in Toronto.  Fred studied law at U of T and was called to the bar in 1889.  He founded Fetherstonhaugh and Company, a law firm specializing in patents which grew to have offices in Toronto, Hamilton, Montreal, Ottawa, Winnipeg, Vancouver, Halifax, Saint John, New York and Washington.  This company still exists today as Smart & Biggar/Fetherstonhaugh. 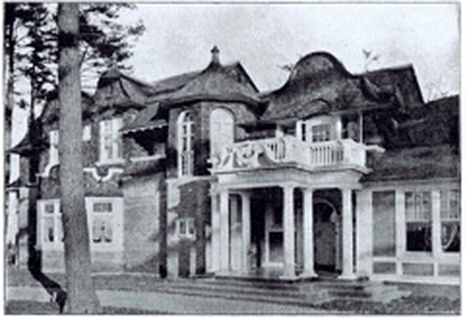 Detail of entrance to Fetherstonhaugh house in 1899 (Source: Canadian Architect and Builder, Vol. XII, No. 7)
In 1887, Fred married Marion Arabella Rutledge and they lived in St. Patrick’s Ward in Toronto.  About 1899, Fred bought a large property on the waterfront in Mimico and built a new house, naming it Lynne Lodge after his mother’s family home in Ireland. A matching stable was built behind the house.  Both the house and stable were designed by popular Toronto architect Henry Sproatt.  They are believed to be the only buildings designed by Sproatt while working independently; all other Sproatt works were completed when he was in partnership with others. 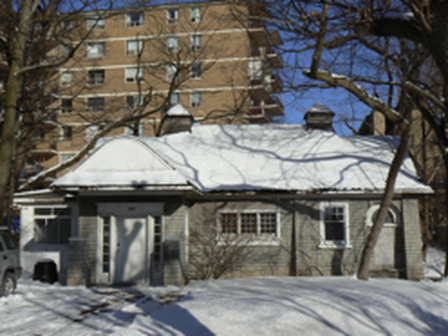 West view of Fetherstonhaugh Gardener’s Cottage, 2011 (Source: Denise Harris)
The house was designed in a sprawling Queen Anne style, with an eclectic mix of differently styled towers, windows, dormers and cladding.  The stable mirrored the house in its Queen Anne style with its wood shingle cladding, flared eaves, twin roof ventilators, buttresses, a mix of flat-headed and round-arched windows, an entry door flanked by narrow sidelights, and decorative columns on the south-facing window. However, with the advent of the automobile, the stable was never used and was soon converted into a residence for the family’s gardener.

Fred and Marion had four children, but tragically three of them died young. In 1889, Godfrey Orme, age 10 months, died of a cerebral haemorrhage after his nurse lost control of his baby carriage.  In 1892, Marion Vivian died of “infantile convulsions” at 20 months of age.  In 1897, Frederic Harold was killed when hit by a streetcar while crossing Spadina Avenue in Toronto at age five. Only the eldest son, James Edward Marion, born in 1888, lived to adulthood, becoming a member of his father’s firm as an engineering expert.

In the early 1890s, Fred was approached by William Still, who wanted to patent a lightweight, high-efficiency storage battery that he had invented.  Fascinated with cars, Fred worked out an agreement with Still where they would build an electric-powered car together.  In 1893, they commissioned John Dixon’s Carriage Works in Toronto to build the car using Fred’s design and Still’s propulsion system.  This electric vehicle – the first built in Canada – was featured at the 1893 CNE and was commemorated in 1993 on the Canadian $100 gold coin.  After Fred moved to Mimico, power to recharge the battery was “stepped down” from the line used to power the Toronto and Mimico Electric Railway that ran past his home.  The car could go only 14 miles on one charge, with a top speed of 15 mph, and it frequently broke down, but nevertheless, Fred used the car for 15 years.

Around 1910, on a small point of land on his property named “Thunder Head” for its fierce lightning storms, Fred also built a “folly” – a stone guest house called “The Towers” that resembled a castle.  Being a yachting enthusiast, he also added a small turning basin for boats and a castellated boathouse of stone to the west.  Marion was reported to have spent many happy hours in The Towers painting lake scenes on crockery.   Soon after, this building was insulated and a third storey added so it could be used as living quarters for their son James and his family after he returned from World War I.  James had been a colonel with the Royal Artillery and earned the DSO and MC. 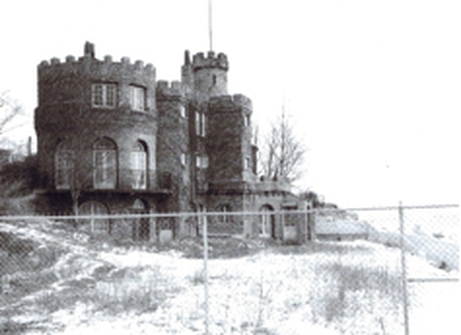 The Towers in 1955 (Source: TPL, James V. Salmon Collection)
During his life, Fred was a member of the Board of Trade, the Manufacturers’ Association, the Canadian Institute, the Masonic Order, St. James Cathedral, the Royal Canadian Yacht Club and the Argonaut Rowing Club.  As a founding member of the Empire Club, he was presented to King Edward VII at Windsor Castle in 1905, and represented the club at the coronation of King George V in 1911.

Marion died in 1930 at age 63 and, in 1932, Fred married Audrey Victoria Emaygh of New York, who was 32 years his junior.  She was described as having a “beautiful dramatic soprano voice” and moving “in a charming musical circle in New York.”  However, the marriage was short-lived and Fred lost most of his assets in the divorce settlement.  He went into debt and his law firm was seized.  He also lost some of his property for non-payment of taxes.

During this difficult period, Fred rented out The Towers to Toronto musician Horace Lapp.  Lapp’s varied musical career included stints as accompanist to the Toronto Mendelssohn Choir; conductor and composer of music for theatrical productions at Toronto venues such as Shea’s Hippodrome; organist for sporting events at Maple Leaf Gardens; and leader of his own dance band at the Royal Muskoka Hotel and the Royal York Hotel.

After living in The Towers for some time, Lapp convinced Fred to let him expand the then-unused boathouse by adding a second floor and turning it into a residence for Lapp and his family.  This boathouse was originally right on the waterfront, and it flooded often.  Fill has since been added so it is no longer right on the water, though it is still on low ground.  Today you can clearly see the stone arches that were once the boathouse doors and windows, and the building is divided into two rental units.  The Towers continued to be a rental property until it was demolished in the late-1950s.

Fred was estranged from his only son, James, who had divorced his wife, Jane, and married their housekeeper, Agnes McCrae.  James reneged on his divorce settlement, leaving Jane and their children destitute.  Jane had no choice but to return to her family home in England with the children.  Fred never forgave James and had no contact with him afterward.

When Fred died in 1945, Jean Ford, a friend and executor of his will, was living with him at Lynne Lodge.  By then his estate was valued at only $13,000.  His son James was not named in the will, but James used legal means to delay its probate until he received some of the house contents.

After the will was finally probated, the property was sold. An apartment building was erected on the southwest corner of Lake Shore Blvd. W. and Royal York Rd.  The house was purchased in 1947 by Hans Sachau of Humber Bay, who had planned to build an apartment on part of the property and keep the house for his family.  However, he soon sold it to the Church family who converted it into a restaurant which failed.  In 1952, the property was sold to Joseph Oliver who turned it into the Lynne Arms Italian Village restaurant.  There were many complaints from local residents about noise from parties in the restaurant, and when it came time to renew the restaurant’s business licence in 1955, the Town of Mimico turned the application down and the restaurant closed.

Fetherstonhaugh house in 1955 when it was the Lynne Arms Italian Village restaurant (Source: TPL, James V. Salmon Collection)
The house was demolished ca. 1957 and the apartment building now at 2667 Lake Shore Blvd. W. was erected on the site. The gardener’s cottage is hidden behind this apartment building, on the brink of a hill with a beautiful view of Lake Ontario. Other parts of the original Fetherstonhaugh Estate that still exist are the turning basin walls, a stone well, stone retaining walls, a stone staircase and the remains of the boat-house’s stone walls.  It’s wonderful to know that at least the charming gardener’s cottage will be protected for posterity as a symbol of the Fetherstonhaughs’ grand Lynne Lodge Estate.

Etobicoke Remembered by Robert A. Given

The Mimico Story by Harvey Currell

Toronto Star, “Pages of the Past” on-line