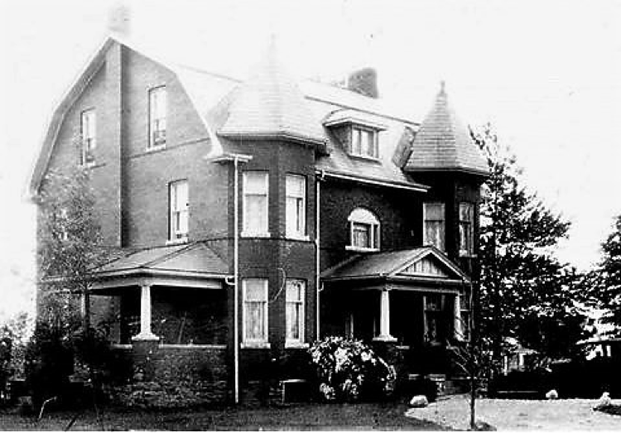 Home of Robert and Elizabeth Eastwood, built ca. 1911 in an eclectic Queen Anne style with a high gambrel roof and octagonal window bays topped by towers. Eastwood Family/PHOTO
The family of James and Martha Eastwood played an important role in the development of Long Branch. In 1845, James Eastwood from England and Martha Smith from Scotland married in Richmond Hill where James worked as a coachman. In 1861, they purchased 219 acres (88 ha) of land south of Lakeshore Road (now Lake Shore Blvd. W.), east of Etobicoke Creek, and moved there with their seven children.

Their new property was originally part of a vast estate granted to Colonel Samuel Smith. The Eastwoods lived in the small log house that had been Smith’s home, eventually expanding it to ten rooms. The property still had most of its original forest, and James cut and sold most of the timber and then farmed the newly-cleared land. In 1883, James sold approximately 64 acres (26 ha) on the eastern edge of his property to the consortium that would develop it into an exclusive summer resort named Long Branch Park (see column January 12, 2017.)

James died in 1884 and Martha in 1916. Five of their seven children -  Annabella, James, John, Samuel and Sarah - never married and lived in the family home their entire lives. Daughter Elizabeth married George Christopherson in 1871 and by 1891 they had moved to Halton County. The youngest son, Robert, married Elizabeth MacGregor in 1912 at the age of 51. Around 1911, Robert built the unique house seen in the above photo for his new bride. It was located at what today would be the southwest corner of Lake Shore Blvd. W. and 37th Street.

Robert was described as tall, reserved, and highly principled. He served on Etobicoke’s council 1895-6. He won prizes every year for his horses, and became a trusted livestock judge. He and his brothers were highly respected locally and when trouble broke out in local hotels, like Mimico’s Windsor House, they were called to defuse the situation. Usually one look at the brothers all carrying their shotguns was enough to restore order.

In 1919, the Eastwoods sold all but six acres of their remaining property to developers, and the area was opened as the “Eastwood Park Estates” subdivision.

Robert died in 1927, and his house was sold to Paul Laurents who operated it as a tourist home until 1935, and then expanded it into a licenced hotel. Under the Laurents’ four generation ownership, it was a respectable neighbourhood establishment. However, after it was sold to new owners in 1987, newspapers began to carry stories about strippers, drunken brawls, and frequent police arrests. By 2008, the building was in such poor physical condition that it was demolished.

There was once an “Eastwood Street” in Long Branch, but in 1935, its name was changed to 38th Street. However, in 2017 the family will be commemorated once again when a new street opens off Long Branch Av., north of Lake Shore Blvd. W., with the name “Eastwood Park Gardens.”