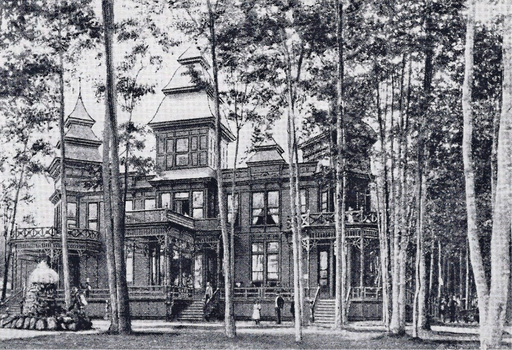 Sketch of Long Branch Hotel by Cliff Simon, published in A Souvenir of Long Branch 1889. Bingham and Webber\PHOTO
When we think of summer resorts in Ontario today, we might contemplate Muskoka, Haliburton, or Algonquin Park. But in the late 1800s, people from Toronto thought of Long Branch in Etobicoke.

In 1883, James and Martha Eastwood sold an estimated 64 acres (26 ha) of land south of Lakeshore Road (now Lake Shore Blvd. W.) and centred on Long Branch Av., to a consortium that planned to subdivide it into 250 villa lots where the well-off could build summer cottages. In 1886, Thomas J. Wilkie, who had held leadership positions with the YMCA in Toronto and Brooklyn, was hired to bring the plan to fruition, assisted by his brother John. This project was named “Long Branch Park” after New Jersey’s famous seaside resort. Soon the entire area was known as “Long Branch”.

The first lot was sold in 1886 to Richard and Amy Ough. Richard was an architect who designed many cottages in the park, including his own which still stands at 262 Lake Promenade. By 1887, 20 lots had been sold and the Long Branch Hotel had been erected with Japanese-style balconies and pagoda-like towers, electricity, speaking tubes in every room, and a private telephone line to Toronto.

The site was surrounded by a high fence and the entrance gate at Long Branch Av. was always guarded. Alcoholic beverages were prohibited at all times, and vehicles were banned on Sundays. The park had an open pavilion for church services and events, a second pavilion where 300 could dine outdoors, a gymnasium, a water slide, a fountain courtyard, and facilities for swimming, boating, lawn bowling, tennis, croquet, baseball and lacrosse. A long wharf was built to provide dockage for the steamers that offered commuter service to and from Toronto, six days a week. By 1895, street cars were bringing visitors, and soon after people were arriving in their own cars.

Between 1910 and 1920, other developers purchased the land south of Lakeshore Rd. from 23rd Street to Etobicoke Creek, as well as the land north of Lakeshore Rd. between 23rd and 30th Streets. They opened seven more subdivisions, many of which took on the cottage-like feel of Long Branch Park.

Long Branch flourished until the 1930s, and then began to decline. Larger cottages were winterized and became year-round homes. The opening of the QEW in 1939 reduced the traffic along Lakeshore Road. Following severe flooding during Hurricane Hazel in 1954, 160 homes on the Etobicoke Creek flood plain were demolished. The once elegant Long Branch Hotel became a rooming house and burned down in 1958. To encourage business, by-laws were changed to allow multi-family dwellings, but many lovely cottages with their elegant trees were demolished and replaced by duplexes. Today, many residents are fighting a new batch of developers who wish to demolish old cottages and replace them with taller semi-detached homes that are changing the character of the neighbourhood irrevocably.