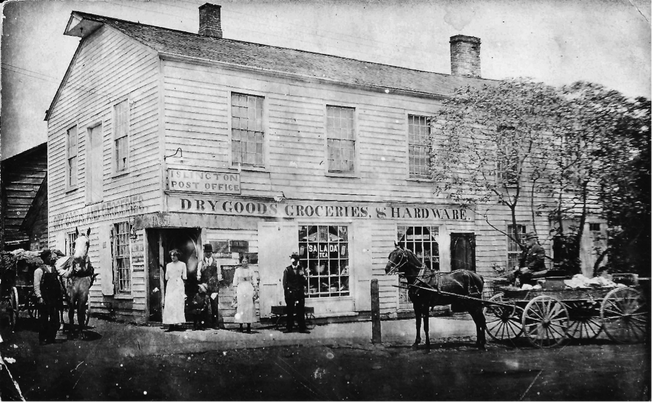 A 1912 photo of Islington’s General Store, built in the 1830s by Amasa Wilcox on the northeast corner of Dundas Street West and Burnhamthorpe Crescent. Montgomery’s Inn/Photo
A look back at the history of one property and its owners can often reveal interesting insights into how a society grows over time. To illustrate, I picked one property in the village we know today as Islington, that is rich with the history of three families who played important roles in its development between 1816 and 1999. Each owner’s property was within the area bound by Dundas Street West, Islington Avenue, Bywood Drive, Kipling Avenue, and Burnhamthorpe Road. This month’s column will cover the Wilcox family, followed by the Musson and Appleby families in two subsequent columns.

Amasa Wilcox and his wife, Desdemona Post, emigrated from New York in 1816 and  leased 40 hectares of Clergy Reserve land north of Dundas Street. They arrived in a pioneer era of development in Upper Canada. Etobicoke was on the frontier: it had no schools, no churches, no banks, no stores, no post offices. The only commercial buildings were mills, and the only commodity in great supply was a seemingly endless stock of trees. However, Amasa was a millwright, and soon received a permit to build a sawmill on the east bank of Mimico Creek, half a kilometre north of Dundas. He later went into partnership with his brother-in-law, Jordan Post, who had a saw mill on Highland Creek in Scarborough and a schooner that they used to ship lumber on Lake Ontario.

Amasa and Desdemona had three sons and three daughters. Amasa built the family a frame house on the southwest corner of today’s Dundas and Islington. In 1822, he received a licence to operate a tavern there. He built a new house for his family on Burnhamthorpe Road, overlooking his mill, and gave their original house to his eldest son Truman (born 1806), who rented it to tenant tavern-keepers.

About 1830, Amasa built the first general store in Islington on the northeast corner of Dundas Street and Burnhamthorpe Crescent. This was an important step in the growth of this fledgling village. Truman operated the store until he was appointed the first postmaster for Etobicoke in 1832, working in Lambton Mills. Amasa’s second son, Frend (born 1808), became a highly-skilled millwright like his father.

In 1839, Amasa – now a well-off widower – moved to virgin land he bought in Oxford county. His family could never understand why he moved to a place of relative wilderness just as Islington was becoming more settled. Nevertheless, Amasa retained ownership of most of his property in Islington, and donated land for three new buildings in the village: the first school (1832); a Methodist chapel (1843); and Islington Burying Ground (1844). These were clear signs of the advancement of civic life in the village. In 1843, Amasa received permission to purchase the land he had been leasing in Islington since 1816, and in 1845 he sold his remaining Etobicoke property to the Musson family, whom you will meet in my next column.