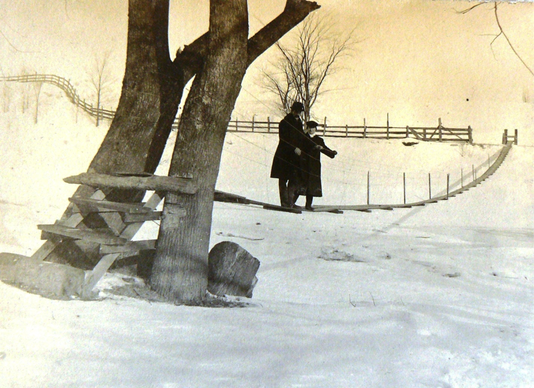 This rather precarious-looking pedestrian swing bridge crossed the Humber River between Westmount and Weston from 1917 to 1950. (Courtesy: Lyn Museum)
Since 1917, three pedestrian bridges have crossed the Humber River south of Lawrence Avenue West, each with its own very different story to tell. The community of Westmount began to develop on the west side of the Humber River opposite the Town of Weston in the early 1900s. In 1913, Dr. Eli Franklin Irwin developed the land on the former Kingdom farm between Scarlett Road and the Humber River at today’s Kingdom Street. Soon the area’s residents were asking for a pedestrian bridge over the river at their location to make it easier for families to shop in Weston. In 1917, Dr. Irwin had a swing bridge built between Raymore Drive and the Weston Fairgrounds. It was constructed of cables strung across the river, with short boards attached at right angles to form a walkway. The sides were of simple wire fencing. The bridge was a delight for children who loved to get the bridge swinging wildly, but frightening for some adults who preferred to walk to Weston the long way around. In this photo of the bridge taken in the winter ca. 1917-20, the man on the left is Anson McNish, a steelworker at the Moffat Stove factory in Weston.

This bridge was pronounced unsafe and replaced in 1950 by a sturdier bridge with concrete abutments and wire cables supporting the platform, slightly north of the old bridge.  This second bridge was washed out in Hurricane Hazel on October 15, 1954 with disastrous results.  During the storm, the massive flow of water down the Humber River caused the west abutment to tear loose while the east one held, as did the wire ropes supporting the platform. The current then shifted the bridge until it stopped at a point where all of the debris coming down the river built up in one location. The water was diverted in a tidal wave across Raymore Drive where 14 homes were lifted off their foundations and floated away. Thirty two lives were lost.

This bridge was not replaced until 1995. That part of Raymore Drive that had washed away was turned into a public park. A unique memorial to the hurricane’s victims was unveiled in 2002. Conceived by local residents, artist Mario Noviello brought their vision to life by transferring murals that display 1954 newspaper articles about the disaster onto huge pieces of concrete from the old bridge that still lay where they were dropped by the flood waters that fateful night.