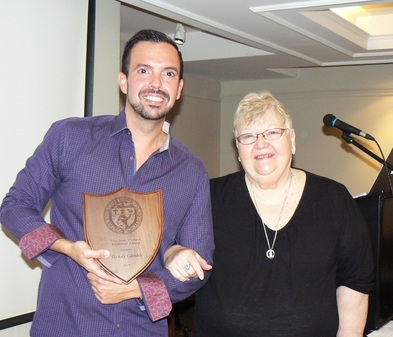 President James Geneau presents the 2014 Jean Hibbert Memorial Award to Wendy Gamble at the EHS AGM on October 23, 2014.
At the October 23rd Annual General Meeting, EHS presented Wendy Gamble with the 2014 Jean Hibbert Memorial Award. In 2014, she received a certificate confirming that she is a descendant of the Ketcheson Family, United Empire Loyalists who settled in Prince Edward County.  Her house on 7th Street in New Toronto is the same house her grandparents moved into when they first arrived in 1917 and where her mother was born. She has an Honours BA in History and Political Science from McMaster University.  And her love for her neighbourhood shines through in her commitment to local history and heritage preservation.

In 1980, Wendy's  local councillor Ruth Grier nominated her for a position on the Etobicoke Historical Board, set up by Etobicoke Township Council in the 1960s to manage Montgomery’s Inn Museum.  Ruth clearly had great judgment, because our Wendy’s involvement with the Inn has continued since then for almost 35 years, through municipal reorganizations and multiple changes in structure.   After city amalgamation in 1998, she continued to serve on the Montgomery’s Inn Community Museum Management Board until these boards were disbanded by the city in 2011.

This group was replaced by Montgomery’s INNovators, a community-based group that supports the Inn.  She served as President of the INNovators soon after its creation and remains on its board of directors.  After the Inn’s outdoor bake oven was constructed, She played a key role in setting up procedures for the entire baking and selling process.  To most of the Inn’s customers, she is their “go-to” person for all baking sold at the Inn.  The money raised through these sales has been key in supporting multiple projects at the Inn. For her long term service and dedication, she received a special award from Montgomery’s Inn in 2013.

In the 1980s, the New Toronto Historical Society started meeting on an informal basis under her leadership.  When the society was incorporated in 1991, she was appointed its first president, and after 23 years she still holds that position. She played a key role in orchestrating the creation of the New Toronto Walking Tour brochure which is in its 4th printing.   In 2013, she chaired a local committee to organize the 100th anniversary of the founding of New Toronto.  The event, which included an historical walking tour and a tea, was a tremendous success with a turnout well above expectation.  Wendy also became a member of the board of the Heritage Etobicoke foundation in 2001, and became its chair in 2011.

For her long term service to her community and her many roles in celebrating local history, we are happy to present the Jean Hibbert Memorial Award to Wendy Gamble.