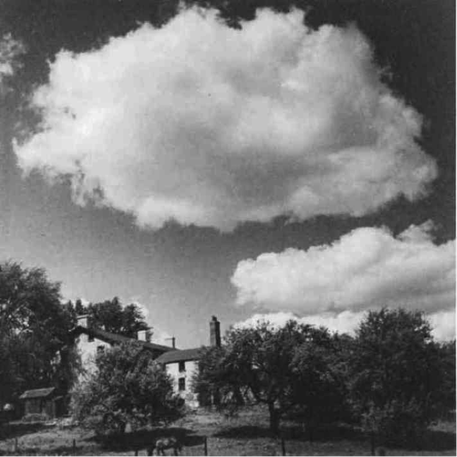 One of Walter Moorhouse’s “restless sky” photographs, with clouds hovering over Montgomery’s Inn circa 1926
I first heard of Walter Moorhouse in 2007 when I discovered a framed collage of photographs in the Etobicoke Historical Society (EHS) archives. The frame was in pieces, the glass was chipped, and the photos had water stains. I soon learned that EHS had made the collage to hang in the Islington subway station. I was intrigued to learn that the photos had all been taken by the same person… Islington resident Walter Moorhouse. I felt compelled to learn more about Walter and his wonderful photographs.

Walter was born in Lambton County in 1883 on a farm called Maplewood where his father bred cattle and produced maple syrup. Walter received basic training as a teacher at the Lambton County Normal School. In 1912, he married Lulu Christian Dobbyn, also of Lambton County, and in 1913, their first child was born – Walter Wilson. They moved to Islington and bought a house built by Walter’s uncle, J.A.L. MacPherson, at 34 MacPherson Avenue (a street later renamed Aberfoyle Crescent.) Walter and Lulu called their new home “Fairoaks”. They had three more children: Ruth in 1916, Noreen in 1920 and Beth Louise in 1927.

Walter received his first-class teaching certificate at the normal school in Hamilton, and he graduated in Honours Classics at Victoria College in the University of Toronto. He worked at the YMCA for short time, an organization he supported his entire life. After teaching at Fern Avenue and Humber Bay Public Schools, in 1918 he joined the staff of Jarvis Collegiate where he was their Classics Master until his 1948 retirement. Walter was active in Islington United Church where he was Sunday School Superintendent for 30 years. The family summered at a cottage they built in 1924 on Muldrew Lake near Gravenhurst.

Walter’s interests were many, and he integrated them with a new pastime that had become his passion – amateur photography. His pictures offer glimpses into life in the areas where he lived, worked and played. He loved to photograph his children, his friends, life at Jarvis Collegiate and the YMCA, Islington village, gardens, nature, people working, and the simple activities of everyday life. He was especially admired for his photos of “restless skies” for which he invented his own development technique (see photo above.)

After Walter’s death in 1957, over 5000 photos and 500 meters of film were donated to the Ontario Archives. Because his work spanned more than five decades, his pictures are in formats ranging from glass lantern slides, to colour transparencies to motion picture film - each requiring special archival care. These images provide a wealth of information about the social and family relationships, recreation, and lifestyles of an affluent family in the early 20th century. You can see some of Walter’s pictures on-line on the Ontario Archives website at http://www.archives.gov.on.ca/ , but his work is even more spectacular when viewed in person during a visit to the Archives.