Sometimes, when researching the history of a property or a family, there are holes in the information that you can’t fill no matter how hard you look. Then, out of the blue, a serendipitous event occurs that leads you to just what you need to fill those blanks. This is what happened when I was researching 125 Kingsway Crescent in Lambton Mills. 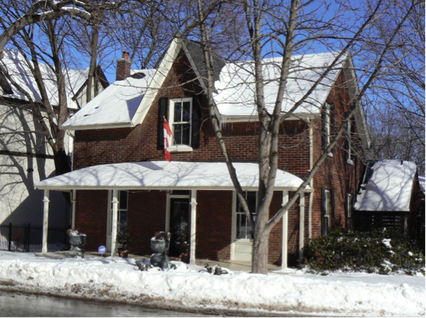 The Traplin-Berry House, Built in 1892
Several secondary sources say that this house was built in the early 1850s, and that John Berry owned the house between 1919 and 1938 when he was treasurer for the Township of Etobicoke.  However, Berry’s name doesn’t appear in the land registry records for this property until 1946 when they show that he sold the house. But how and when did he acquire the property to begin with? Clearly there are omissions in the Land Registry records, but how can these gaps be filled? In city directories, Berry is shown as living in Lambton Mills from 1890 to 1894, and then he disappears from 1895 to 1914, and returns to Lambton Mills again after that. Where did he go for 19 years and why? And for that matter, who actually built the house and why do we think it was built in the 1850s?

Then I received an e-mail from a gentleman asking if I would be interested in interviewing his 91 year old mother, Isabel Ferguson, who is John Berry’s granddaughter and grew up with him in the house at 125 Kingsway Crescent. Of course my answer was a resounding, “YES!” So, in October 2014, I had a long chat with Isabel - by phone because she lives in Newcastle.  It was a delightful conversation, and Isabel’s memory is still very sharp!  She was able to answer all of my questions and filled in most of the information I was missing. After our conversation, I was then able to go back to the research sources available and verify the full history of the house and the Berry family’s connection to it.

John Roberts Berry was born in 1858 in West Yorkshire, the 5th of 10 children born to Titus Berry and Jane Roberts. His father worked in the textile mills of Cleckheaton, Yorkshire. By the time John was 12, he was already living outside the family home and working in a textile mill.  He immigrated to Canada in 1880 and got a job at Dominion Woollens and Worsteds Ltd. in Hespeler, Ontario. In 1882, he married Frances Isabella Traplin, daughter of John Traplin (a co-worker) and Eliza Marshall.

By 1890, John and Frances Berry had moved to Lambton Mills with their growing family. John became the proprietor of an existing woollen mill, in partnership with William Phillips.  Located on the west side of the Humber River, south of Dundas Street West, this mill had originally been built by Thomas Fisher as a grist mill in 1834 and was now called Lambton Mills Wool Manufactory.  The Traplin family, including parents John and Eliza, and children Maude and William, moved to Lambton Mills with the Berrys.  John Traplin worked in the mill as a wool dyer and Maude was a weaver. William worked in the village as a painter. By then John Berry’s brother Titus had arrived from England and he also worked in the mill as a weaver.

The Berrys rented a house from Isaac Scott on the east side of Fisher’s Lane (also called Millwood Avenue and now Kingsway Crescent), south of Government Road. The Traplins rented a house on Dundas Street, perhaps in one of the mill worker row-houses that existed at that time (three of which remain at 4168, 4170 and 4172 Dundas Street West.)

In 1889, William Reford, a real estate developer from Toronto, bought a piece of land on Lot 10, Concession C, between Fisher’s Lane and the Humber Valley, and south of Dundas to Government Road.  He filed Plan 989 to subdivide his new property into 37 building lots. In 1891, John Traplin bought Lots 9 and 10 for $770 and built the house we know today as 125 Kingsway Crescent for his wife.  Eliza Traplin selected the style and John Traplin paid for the house, but it was their son-in-law John Berry who managed the contractors and oversaw the building of the house for his in-laws.

So, 125 Kingsway Crescent was built in 1892 by the Traplins, not in the 1850s by some unknown person. The map of subdivision Plan 989 clearly shows that Lots 9 and 10 had no structures on them when they were purchased by the Traplins. In addition, assessment records show these two empty lots assessed together at $100 in 1891 and then $800 in 1892 after the house was built.  With its 1 ½ storey centre hall plan and peaked gable over the front door, this house’s architectural style was so common between 1830 and 1890 that it is became known as “Ontario Gothic.”  The style was less popular after 1890, but was still used occasionally.  For example, William Clayton of Lambton Mills used that style when he built a house in 1890 on Dundas at Prince Edward Drive.  However, the Traplins’ style choice may have helped persuade people that the house was built in the 1850s.

Berry and Phillips ended their partnership in the woollen mill in 1891, and John Berry continued to operate the mill as John R. Berry & Co.  However, by 1893, Berry was no longer the mill proprietor and was working as a commercial traveller (salesman.) Isabel Ferguson was told by her grandfather that the mill had closed because of a fire. I could find no evidence of this fire, but another possibility is that he left as a result of the poor financial performance of the mill.  In fact several previous proprietors had also left as a result of financial problems.  Regardless, the mill reopened in 1894 with a new proprietor, William Morrison.  Maude Traplin continued to work in the mill, but John Traplin became a constable.  (Ultimately this mill was destroyed by a severe fire on January 20, 1901 and never reopened after that event.)

By 1894 John Berry had found a new job as superintendant of Bay Woollen Mills in Beauharnois, Quebec and moved there with his family, including all six children: Robert, Grace, Clara, Elizabeth, Gladys and May. They stayed in Quebec until 1901 when John got a new job as superintendant of the Little Falls Knitting Co. in New York State.  This time, Eliza Traplin joined the family in New York as her husband John had passed away in April of that year. The family lived in Oswego, New York while John commuted back and forth between Oswego and Little Falls.  While there, daughter Grace married Roy Dodge, who was badly injured in a streetcar accident shortly after their marriage and was unable to work.

​The family staying in Oswego until 1914 and then returned to Lambton Mills. This time the whole family, including Grace and Roy Dodge, moved into 125 Kingsway Crescent. That same year, Eliza Traplin transferred the ownership of 125 Kingsway Crescent to her daughter, Frances Isabella Berry. 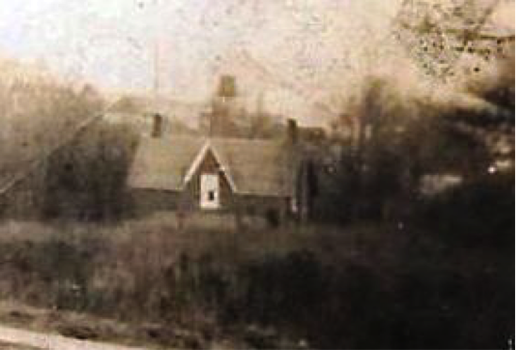 View of 125 Kingsway Crescent, looking to the northeast from Government Road ca. 1915. There is still very little development near the house. (Source: Adam Howell).
In 1918, John Berry was hired as treasurer for the Township of Etobicoke. Until the township hall on Dundas Street in Islington was enlarged in 1922, Berry worked in one of the three parlours on the main floor of 125 Kingsway Crescent.   He was Etobicoke’s treasurer for 20 years, retiring in 1938 at the age of 80.  In the Etobicoke Township Council meeting minutes for December 12, 1938, Reeve J. Armstrong is quoted as saying, “... my only hope and trust is that time will prove that we made no mistake in our selection of him [H.L. Cummings] as a worthy successor to Mr. Berry, who bore the heat and burden of the day for over 20 years, and whose shoes his successor will find hard to fill.”

Eliza Traplin passed away in 1928, followed by her daughter Frances Berry shortly after in 1934. Ownership of 125 Kingsway Crescent transferred to John Berry from his wife’s estate.

Isabel Dodge, Grace and Roy’s daughter, was born in 1923 at 125 Kingsway Crescent and lived there with her family, including her grandfather John Berry.  She married Glen Ferguson just as he was going overseas in World War II, so she continued to live with her grandfather while Glen was away.

Isabel recalls that the property had a large barn behind the house, and when she was very young the bathroom was in the barn. The house had four bedrooms upstairs, and in the late 1920s one of these rooms was turned into a bathroom.  The family always attended St. George’s Anglican Church on-the-Hill and many family members are buried in St. George’s cemetery. John played the organ at St. George’s church services every Sunday for many years. He also played the piano in their home, often playing very loudly in the morning to wake up his sleeping family.

​Isabel called her grandfather a true “English gentleman.”  He was known for his distinctive walrus-style mustache, which can be seen below in the photo of Etobicoke’s Township Council in 1925-6. 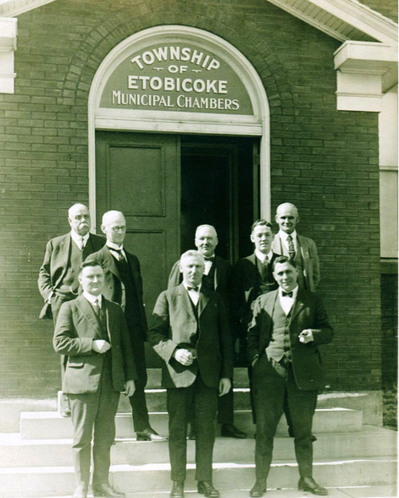 Township of Etobicoke Council 1925-6. John Berry is at the left rear. (Source: Montgomery’s Inn)
In the summer he always wore a pansy in his lapel, picked from his own garden every morning. He walked to and from work every day, and never owned a car. When he came home from work, if it was nice weather, he sat on the front verandah smoking cigars or his pipe, and it was Isabel’s job to remove his shoes and replace them with slippers.

John Berry transferred ownership of the house to Isabel and her husband Glen Ferguson in 1946. Soon after, John moved into a small private nursing home near Six Points. Isabel and Glen sold Lot 10, minus a narrow strip on its southern edge, to Thomas J. Dennett in 1949. The next year, they sold Lot 9 plus the narrow strip from Lot 10, including the house at 125 Kingsway Crescent, to William and Ida McIntyre.  The Fergusons bought a new house for themselves on Jopling Avenue. On February 15, 1951, John Berry passed away at the age of 92.

Some people may feel disappointed that the Traplin/Berry house is not as old as we once believed it to be. But at 123 years of age, it is still a very old house, and its heritage value comes from more than just the date it was built. This house has stories to tell about Lambton Mills as a mill town and about the people who earned their livelihood there.  It also tells the story of John Berry who worked as Etobicoke’s treasurer for 20 years, four of them at 125 Kingsway Crescent.

So many thanks to Isabel Ferguson for sharing her stories about her family and her life growing up in this venerable old house!