On December 18, 1941, Etobicoke Township’s Council gave final reading to a by-law conferring the name “Central Park” on a new athletic field they had opened along Mimico Creek in Islington, between Dundas Street West and the CPR tracks.  Reeve William Armstrong was appointed as chair of the park’s new Board of Management. J.A.L. MacPherson, who lived on Aberfoyle Crescent, was instrumental in persuading the Montgomery family to donate this initial piece of land for the new park.  In 1944, “J.A.L.” donated additional land of his own to expand the park from the CPR tracks south to Bloor Street West, and succeeded Armstrong as chair of the park’s Board of Management.​ 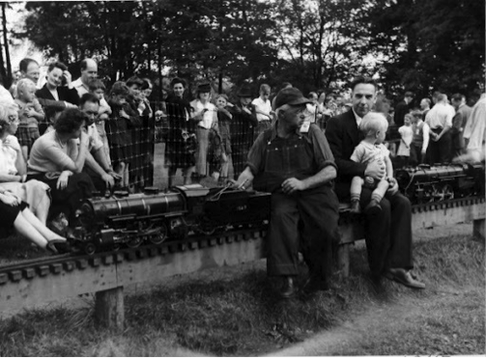 TSME Acres 1947 – Mr. Matthews of Chicago taking a father and son for a ride.
The pond was built in 1946 using a bulldozer to form a simple earthen dam across Mimico Creek. By 1953, this earthen dam had deteriorated and was replaced by one of concrete. 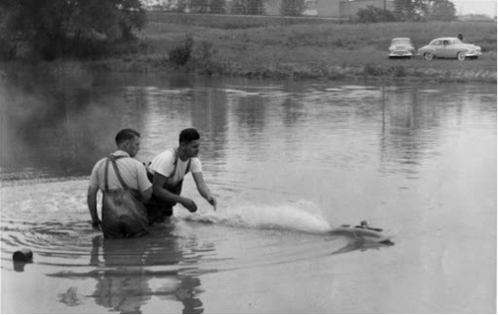 TSME Acres 1948 – looking east. Chuck Palmer and Charlie Watkins of Chicago try out their model boat in the pond.
Locomotive meets were held from the late 1940s to the early 1950s, as well as annual New Year’s Day “Steam-ups”.  Their International Model Power Boat Regattas and Live Steam Model Locomotive Shows drew competitors from Toronto, Hamilton, Chicago, Detroit, New York, Jersey City, and Springfield MA.  Local observers from the community began to attend, too - soon begging for rides.  The club members obliged, particularly for children. In summer, the pond was usually full of model boats and one year a record speed of 80 mph (129 Kph) was reached. 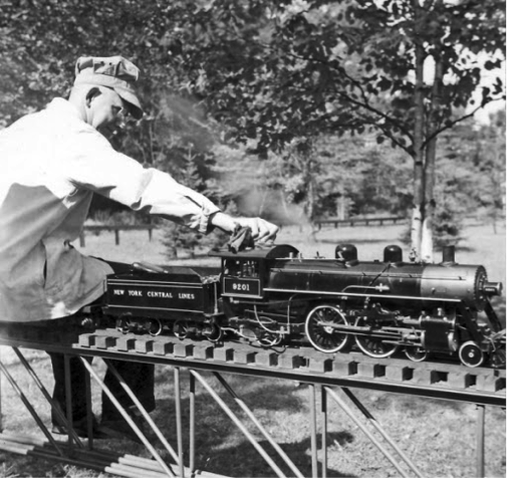 New York Central Atlantic locomotive running at the 6th International TSME Meet in 1952. Note the track in the distance, indicating the large circumference of the layout.
Hurricane Hazel did some minor damage to the dam in 1954, but it was promptly repaired.  However, changes in neighbourhood roads and new rules banning cars from driving into the park, led to the site’s decline and eventual abandonment.  The dam was dismantled in 1957, and the model railway track was removed in 1961.

​TSME still exists as a modelling club in Toronto, meeting today in the Don Mills Public Library and holding occasional model shows.  Many of today’s members wish they could have TSME Acres back again! 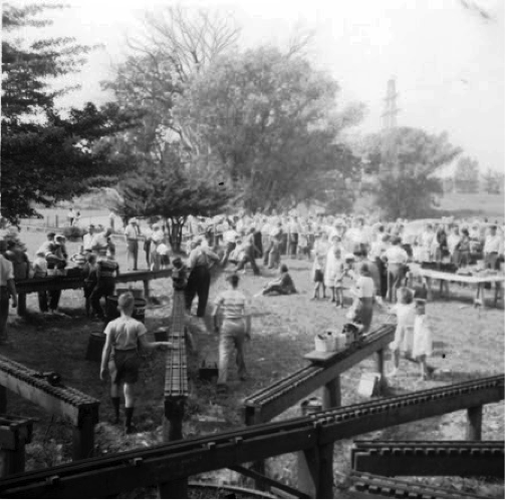 TSME Acres model train roundhouse and a crowd of local children in 1951.
In 1998, Central Park was renamed Tom Riley Park after the man who, for 28 years, had been Etobicoke’s Parks and Recreation Commissioner.  Recreation professors at Waterloo University said he gave Etobicoke “the best parks system in the country.”  He created the massive Centennial Park complex, opened in 1967 to commemorate Canada’s centennial. He also introduced creative ideas such as “Community Schools” used for recreation in off-hours, and a $10,000 matching grant program to help parents and groups to acquire new playground equipment. He was described as politically savvy, passionate about sports, a strong leader - and he loved Etobicoke.  He was recognized with many honours including: the Queen’s Silver Jubilee Medal; the Province of Ontario Corps d’Elite; and induction into Etobicoke Sports Hall of Fame.  When he retired in 1998 at city amalgamation, he was honoured with the renaming of Central Park to Tom Riley Park.  When he passed away in 2013 at the age of 79, a public memorial service was held for him in Centennial Park.

Thanks to today’s TSME members for sharing their group’s history. All photos are from www.tsme.ca.