The Wood Family of Islington

Few of us today would remember that the Six Points intersection - where Dundas, Bloor, and Kipling meet - was once called “Wood’s Corner” after the family that eventually owned land on five of its six points. No trace of their homes remains, but some stories, photos and family memorabilia still live in the Etobicoke Historical Society archives.

Samuel Wood was born in Yorkshire England in 1806. In 1830, he sailed to New York City where he learned the silk trade. He soon set up his own silk business in Philadelphia and made many trips to Europe to buy silk. However, like all silk traders, many silk skeins were ruined by salt water while crossing the sea. Samuel and another merchant invented a method of salvaging these damaged goods, making both men very wealthy.

​In 1837 Samuel married Janet Buchanan of Philadelphia. The following portraits of the couple were painted in New York City soon after their wedding. 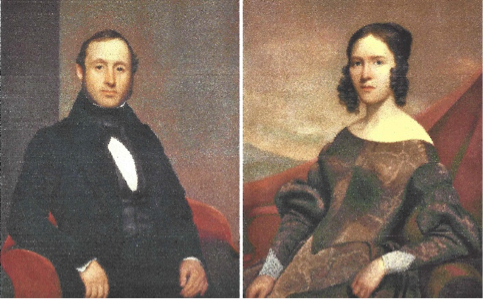 Samuel became friends with William Hamilton Merritt, builder of the Welland Canal in Upper Canada. While visiting Merritt in St. Catharines, Samuel expressed a desire to live under the British flag. At the same time, the European silk market was experiencing increasing competition from silk grown in the southern United States.  Merritt suggested that Samuel investigate opportunities in York County where there was plenty of good land. Samuel soon found his way to Etobicoke.

In 1841, Samuel bought 50 acres of farm land on the northwest corner of Bloor Street and Kipling Avenue. He and Janet, along with their first two children, moved into a log house already on their property.
​
On learning of Samuel’s background and apparent wealth, neighbours in Islington predicted he would not last the summer. However, Samuel settled down quite easily to the role of a gentleman farmer. He hired a team of men to build a brick house modelled on an English manor home. When completed in 1843, the house had three storeys, ten-foot high ceilings, nine fireplaces, a basement wine cellar, a 3rd floor ballroom, and Islington’s first indoor bathroom. The house was named “The Maples”’ and Samuel was the first resident in the village to own a carriage.  He soon fit in well with the community. 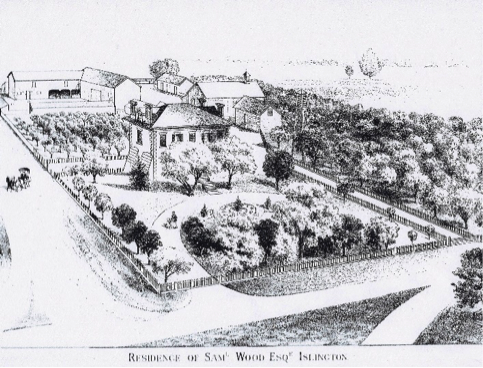 This drawing of the Wood estate was displayed in the 1878 Atlas of York County for all to see.
Samuel and Janet had nine children in total, with the last one arriving in 1869. Their names in chronological order were Samuel Rhodes, Ellen, James, John, Joseph, William, George J.T., Frederick and Arthur.

Ellen never married and lived with her parents and siblings until she died in 1912. James was engaged to be married, but he died in a farm machinery accident prior to the wedding day. John’s fate is unknown as he sought his own fortune in the United States and was never heard from again. William went to the United States where he married and lived in Detroit for the rest of his life.  In 1880, Frederick left Islington for the United States where he worked in many different jobs for 65 years. He returned unexpectedly to Islington in 1946 and lived with his brother George until his death at age 97.

The remaining four sons lived in Islington for most of their lives and over the years they lived on five of the six points of “Wood’s Corner.”
Samuel and Janet’s eldest son, Samuel Rhodes, married Amelia Musson of Islington and they had two children, Harry and Jennie. They took over the land on the northeast corner of Dundas and Kipling and built a home  in  the  woods. They  farmed  and  raised  cattle, eventually inheriting a large section of the 200 acre property left to them by Amelia’s father, Edward Musson, located where Islington Golf Club is today. Samuel Sr. died in 1881, his wife Janet in 1894, and Samuel Rhodes died of cancer in 1895. Harry inherited the property from his father, but eventually moved to Stratford where he founded a button factory.

For almost 60 years, the third son, Joseph Wood, farmed the land east of Kipling, on a wedge of land between Dundas and Bloor. He was also a builder and constructed his own house facing Dundas Street. His wife was Ann Rice.

George J. T., the 6th son, acquired 35 acres of land on the southwest corner of Kipling and Dundas where he grazed cattle. He also obtained 30 more acres from his brother Joseph where Six Points Plaza is today. In 1890 he built a brick house called “Woodlawn” on the south side of Dundas where he brought his new wife, Elizabeth Peers of Weston.  They added an east wing in 1910.  Their son, George P. Wood, was born in the house, lived there with his wife Gertrude, and was the last Wood to live in Islington, inheriting the property when his father died in 1934.

George P. Wood had his own business called Geo. Wood Mfg. Co. where he made incubators and brooders on Rebecca Street in downtown Toronto. He was also a real estate developer. He built the Viking Road subdivision on his own land south of the CPR tracks. He bought land between Islington and Kipling, south of Rathburn and developed the Islington Heights subdivision there in the early 1950s. He also built the Westwood Theater on the southwest corner of Bloor and Kipling. It opened on a snowy day in 1952 and was demolished in 2013. George and Gertrude were very active members of the Etobicoke Historical Society. George passed away in 1973. 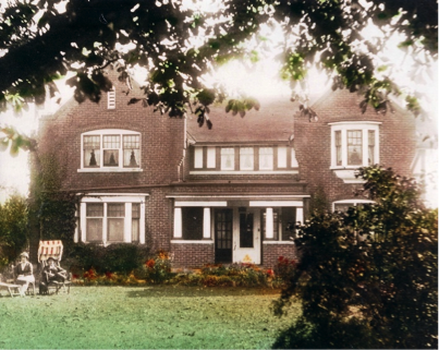 “Woodlawn”, on southwest corner of Dundas and Kipling. Built by George J. T. Wood in 1890. Inherited by his son George P. Wood who lived there until his 1973 death.
​The youngest brother, Arthur, sold most of the original Wood land in 1918. Then he moved with his family to Chinguacousy Township in Mississauga. He retained ownership of “The Maples” and rented it out until 1940. After that, the main house was sold out of the family.
In 1966, “The Maples” was demolished to build part of the new Six Points interchange. A small strip mall now sits where the Woods home once graced the neighbourhood. 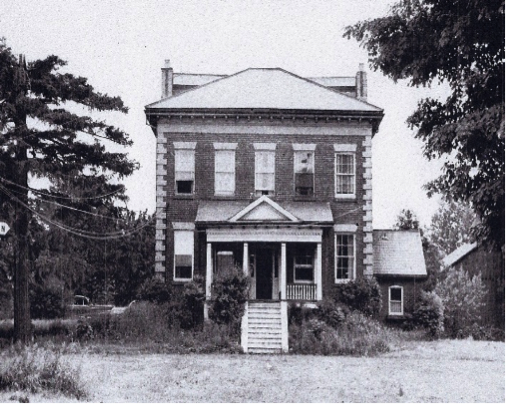 "The Maples", just prior to its 1966 demolition
In the late 1940s, there were several streets in Etobicoke named after the Wood family: Wood Avenue (now Prennan Avenue), Woodlawn Avenue (now Viking Road), and The Wood Road (now Pheasant Lane). They have all been renamed because they were duplicates of other streets in the Toronto core. In addition, the name of “Wood’s Corner” has been lost over time.  Happily, in 2019, Toronto City Council approved the new street name of “Samuel Wood Way” for a new private street in Etobicoke, just south of Dundas and west of Kipling.

NOTE: This author recognizes the contributions of the late Vera Halhead of the Etobicoke Press in the 1950s. She also acknowledges the late Gertrude Wood for donating many artifacts from the estate of George P. Wood to the archives of the Etobicoke Historical Society. A list of these items can be found by CLICKING HERE.