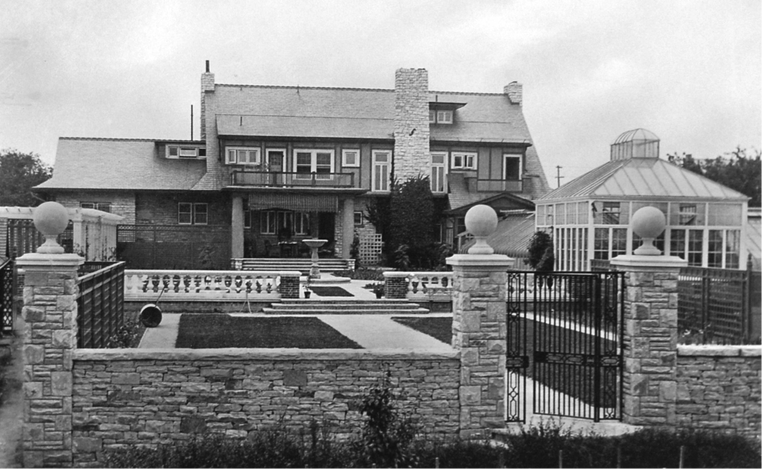 A view of the rear of “Myrtle Villa”, the estate of James and Anna Franceschini, showing part of the Dunington-Grubb designed gardens ready for spring planting. This part of the gardens still exists today. Courtesy: TORONTO ARCHIVES
The Ormsby/Franceschini Estate is a rare surviving example of a large family compound on the shore of Lake Ontario in Mimico. It is located on the south side of Lake Shore Blvd. W., opposite Vimy Ridge Parkette.

Albert Ormsby was the owner of A.B. Ormsby Limited, metal fabricators. His wife Sarah was a leader in both the temperance and women’s suffrage movements. In 1903, they bought land on the lake and by 1910 had erected a grand manor house they named “Ormscliffe”. Designed by architect Frederick H. Herbert as a large-scale California-style bungalow, Construction magazine described it as “one of the more interesting houses of recent erection.” The Ormsbys soon engaged the noted landscape architecture firm, Dunington-Grubb, to design gardens that ran south from the house to the lake.  After Albert retired, the Ormsbys sold the house in 1925 and moved to California where Albert founded a fruit distribution business.

The property was purchased by James and Anna Franceschini, who renamed the estate “Myrtle Villa” after their only child. Born in Italy, James had arrived in Canada in 1905 at age 15 with nothing, and went on to found Dufferin Construction. James had the house remodeled into an Italianate style, added a house for his brother Leonard, and built row housing for staff. He bought more land to the west and constructed an equestrian centre for his prized Hackney horses.

In 1940, even though his company was building minesweepers for the Canadian Navy, James was arrested on suspicion of engaging in “Fascist activities.” After a year in an internment camp, he was released so he could receive medical treatment. A subsequent public inquiry determined his complete innocence. Now in ill health and semi-retired, James moved  into a new home he built at Mount Tremblant.

Myrtle Villa was sold in 1959 to Amedeo and Lawrence Longo, brothers who developed the Amedeo Garden Court Apartments on the property. They retained and repurposed most  of the existing buildings and garden features, while new apartments were constructed in the open spaces among the estate buildings. In 2013, fearful that the demand for high rise condominium development in that area was increasing, local residents and heritage groups were successful at having all of the original estate buildings (a total of 11 addresses) and the garden protected by a heritage designation by-law.