The first home (35 Daniels Street) is located in what was once a major market gardening area, near Mimico Creek and The Queensway. Although further research is required to verify this, it appears that it was likely built by Herod and Mary Noble.  The Herods’ property straddled Mimico Creek, and the wet valley land was ideal for market gardening.

Their first house was a 1-storey log dwelling, followed sometime between 1852 and 1861 by this 1½ storey brick home, set low to the ground with a low gabled roof. An attractive open verandah extends across the front of the house.  The upper storey on the east side of the house has a unique Gothic-style window.  The house also has decorative quoins and a brick plinth around the base which slopes towards the ground.  All of the brickwork is now painted a pale green. 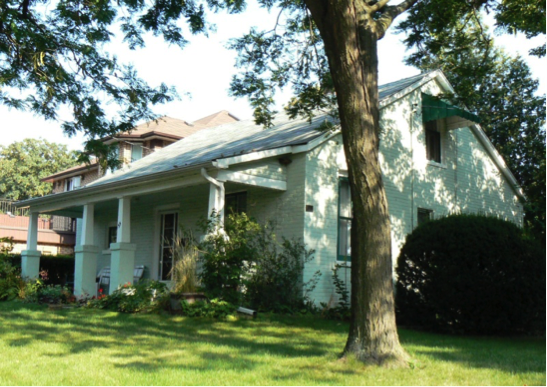 Recent picture of the Noble-Daniels Market Garden House at 35 Daniels Street. House built ca. 1852-61
After Herod Noble passed away in 1875, the property was sold to Francis Daniels, another market gardener who moved to Etobicoke from Yorkville. He lived in this house with his wife Susan and their family until 1890 when they moved into an existing house slightly further west at what is now 82 Daniels St.

It is likely that the house at No. 35 then became a residence for Daniels’ market garden workers.  This house is listed on the City of Toronto’s Inventory of Heritage Properties.

Further down the street is 85 Daniels Street.  It appears that the rear portion of this house was in place by 1861 when a frame house was described in the census. In 1890, Francis Daniels added the front part of the house and had the entire structure encased in brick.

The house is of 2½ storeys and built in an “Ontario Gothic” style with a central gable over the front door.  The cladding is red brick, with stone and wood trim. The open front porch has wood piers supporting a flat roof that forms the base for a balcony. At the rear of the house are a single storey shed-roofed kitchen wing, perhaps from the original frame dwelling, and an adjoining barn. 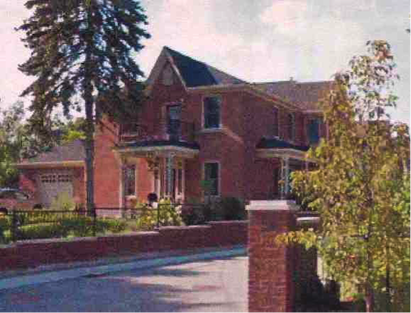 Current view of 82 Daniels Street, the Daniel Market Garden House built ca. 1861; and enlarged in 1890.
Beginning in 1951 and continuing for over half a century Wilfred and Sarah Tomlinson operated a wholesale flower and vegetable business from greenhouses on this property.  The house is on the City of Toronto’s Inventory of Heritage Properties and a by-law was passed to designate it under the Ontario heritage Act in 2006.

Daniels Street has had that name since at least 1931.