The Naming of Islington

In the EHS archives, there is a three-page document, handwritten by David Lyle Streight sometime before 1929, describing how the village of Mimico on Dundas Street came to be called Islington.  At age 17, Streight was present at the meeting where the name Islington was chosen.

D.L. Streight was born in Kemptville, Ontario in 1842, and his family moved to “Mimico” – now Islington – ca. 1852.  As an adult, Streight owned a lumber store and house on Cordova Avenue, adjacent to the CPR tracks.  He lived in Islington Village until his 1929 death.  His son, Col. J.E.L. Streight, had a distinguished military career, and the Royal Canadian Legion Branch 210 on Jutland Road in Etobicoke is named for him. Here is the first page of the actual archival document written by D.L. Streight: 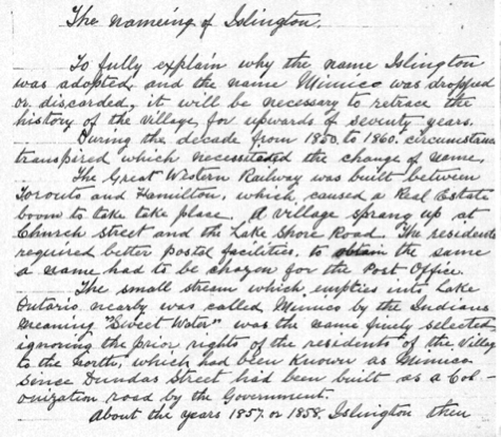 The following is an exact, unedited transcript of the complete document:

To fully explain why the name Islington was adopted, and the name Mimico was dropped or discarded, it will be necessary to retrace the history of the village for upwards of seventy years.

During the decade from 1850 to 1860, circumstances transpired which necessitated the change of name. The Great Western Railway (1) was built between Toronto and Hamilton, which caused a Real Estate boom to take place. A village sprang up at Church Street (2) and the Lake Shore Road.  The residents required better postal facilities.  To obtain the same a name had to be chosen for the Post Office.

The small stream which empties into Lake Ontario nearby was called Mimico by the Indians meaning “Sweet Water” was the name finally selected, ignoring the prior rights of the residents of the Village to the north, which had been known as Mimico since Dundas Street had been built as a Colonization road by the government.

About the years 1857 or 1858, Islington then known as Mimico was without Postal facilities although a stage coach carried the mail daily from Cooksville and intermediate points to Toronto.  All mail matter for the village was addressed to Etobicoke Post office, located in Gamble’s store on the hill on the west side of the Humber River, now known as Lambton Mills.  The next post office westward on Dundas Street was Summerville (3).
There was a large locality at that time without postal accommodation, an agitation was started to get postal facilities.   A sub-office was permitted by the Postmaster General and allowed the Postmaster of Etobicoke to forward all mail matter for this locality to Mr. Thomas Musson’s General Store (4) for distribution.  As this arrangement proved very unsatisfactory a requisition was forwarded to the Government to establish a regular Post office and to appoint Thomas Musson Post Master.
​
The Government acceded on condition that another name be selected as there was already a Mimico post office. Many names were suggested at a Public Meeting held in Thomas Smith’s Hotel (5), and were discussed, but a unanimous selection could not be obtained.  Before the meeting dispersed it was finally agreed to ask Mrs. Smith6 to name the village, to which she agreed to do after her native town in England, namely Islington (7) which is now part of the City of London.