Running east off Scarlett Rd., just south of Lawrence Av. W. and opposite Yorkleigh Av., is a pleasant cul-de-sac named The Elms.  The street first appeared on maps in the 1970s and it is lined with 1970s single family dwellings. It was in the 1970s that Dutch elm disease’s devastation of Toronto’s elm trees was at its peak. Was this street named as an ode to dying elms? Actually it was named to remember a grand estate called “The Elms” that stood on that property from about 1850 to 1967.

​“The Elms” was the property of Graeme Gibson Adam and Grace “Nettie” Rolph Adam.  They had married in 1899 and lived in Toronto at 160 St. George St.  Graeme was the top executive at the Toronto head office of the Bank of Montreal.  Nettie was a member of the Rolph family, highly successful Toronto lithographers since 1867.  By 1913, the Adams had purchased “The Elms” as a summer residence, but it later became their permanent home after Graeme retired. Tragedy struck in 1918 when their only child, Constance Madeline, was killed at the age of 18 in an accident involving a Toronto streetcar. The Adams installed electricity in St. Philip’s Anglican Church in Weston in her memory. 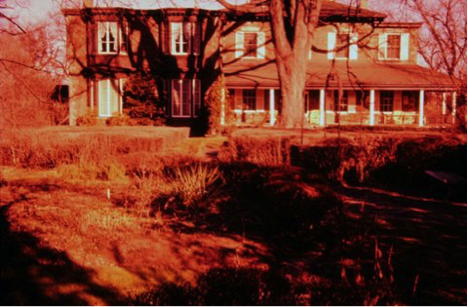 A 1950s photo of the front facade of “The Elms”, which faced west. The back of the house faced east and overlooked the Humber River.
The Adams shared their house with Nettie’s bachelor brother, Dr. Albert Hill Rolph.  Dr. Rolph was a very well-respected radiologist who practiced at the Hospital for Sick Children.  He had served as a Captain in the Canadian Expeditionary Forces during World War I.
The above photo reveals The Elms to be architecturally rather unusual, built in sections with different styles that were added in stages. The original section (seen with a hipped roof, behind the light-coloured trunk of a large elm tree) was likely built by John Hill in the mid-19th century in a Georgian style. A later owner built an addition on the left (north) side in an Italianate style with a flat roof. At some point, a small addition was built on the south end with a long verandah linking it to the original part of the house.
​
The house had 39 rooms with a sun verandah and fish pond at the back, facing the Humber River. The dining room was also at the rear of the house, overlooking the river through two large bay windows. A large garage held Mr. Adam’s Cadillac and Mrs. Adam’s Packard.  The complete estate was eight acres, of which two acres were gardens. There was also an enormous greenhouse with a steel potting shed.
The driveway off Scarlett Road had two stone gate posts and was lined with elm trees.  It basically divided the property in half. The Adams looked after the garden south of the driveway, with roses their specialty. Dr. Rolph looked after the garden north of the driveway, with irises his specialty. He helped found the Canadian Iris Society and developed several new iris cultivars, two of which he named for his sister, Nettie. They employed two gardeners to maintain the grounds. 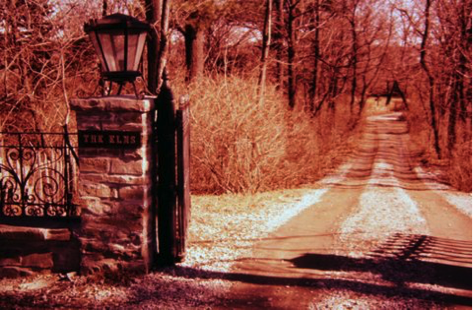 Main entrance to “The Elms” from Scarlett Road, looking east down the long driveway in the 1950s.
​When a visitor reached the end of the driveway seen in the above photo, the driveway turned right (south) and where you would then drive in circle around a tall elm tree in front of the house to be dropped off. 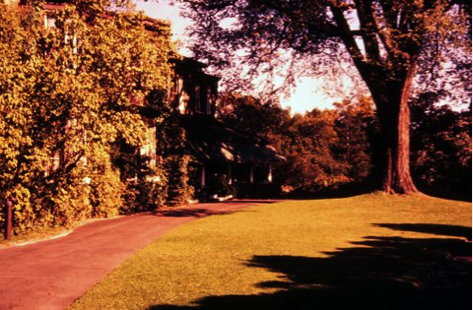 The front of the house, looking south. On the left is the north addition, covered with ivy. The large elm tree is in the middle of the circular driveway.
​There were living quarters for a butler, a cook and a maid at the rear of the house on the second floor. The head gardener and his family lived in the gatehouse that was adjacent to the main entry gate off Scarlett Road. George Edwards, who was head gardener in the 1950s, also chauffeured the Adams, shovelled snow, cut grass, tended the house’s two boilers, and acted as general handyman, while his wife set and waited table for special dinners at “The Elms”. 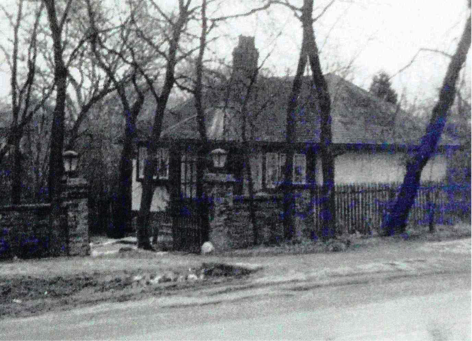 The gate house just inside the main entrance to “The Elms” off Scarlett Road.
The Adams were mentioned frequently in the society pages of Toronto newspapers.  In 1919, the Toronto Star announced, “This afternoon Mrs. Graeme Adam is entertaining the rose lovers at her wonderful rose garden at Weston.”  In 1932, a clipping said, “Mr. and Mrs. Graeme Adam have left for their summer home, ‘The Elms’, in Weston.”  In 1935, it was noted, “Mrs. Graeme G. Adam opened her home, ‘The Elms’, Weston, this afternoon for a garden tea in the interests of the Canadian National Institute for the Blind.”
Graeme died in 1947 at age 83, and Nettie in 1962 at age 85.  They were buried in Forest Lawn Mausoleum, where their daughter  had also been laid to rest.

Dr. Rolph died in December, 1966 at age 86 and was buried in St. Philip’s Anglican Church cemetery in Weston.  His obituary recalled that he was “a violinist of no mean attainments”, a poet who had a book of his poems privately published, and an avid mountaineer. However they noted that since his retirement, “His great love had been his garden at Weston to which he devoted time and talent so that it became one of the outstanding private gardens in Metro Toronto.”

After Dr. Rolph died, the house sat vacant.  It survived a fire in May 1967 believed caused by children playing with firecrackers.  Then, on October 1st of that same year, a more severe blaze of unknown origin led to the house’s immediate demolition.  The property was sold to developer, Belmont Construction, for $325K.  The land was developed into houses along two streets named The Elms (where the former driveway had been) and Vista Humber Drive (approximately where the circular driveway was once located.)

Today, a single street name is all that’s left to remind us of “The Elms” estate and its once- beautiful elm trees and gardens.