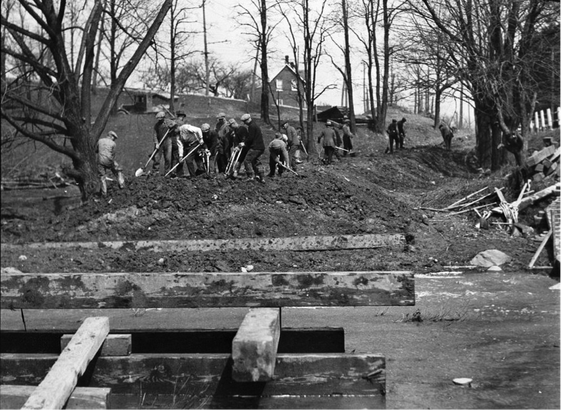 Summerville bridge collapse: workmen building detour Apr 1929 (Courtesy: Toronto Archives)
Summerville was a community that once existed along Dundas Street West on both sides of Etobicoke Creek. On April 14, 1929, the bridge over the creek collapsed, sending a car with four passengers into the creek, seriously injuring one young woman. This photo was taken on April 15th facing east toward the Etobicoke side of the creek. Work crews were already busy building a temporary road and bridge immediately north of the collapsed bridge. The building at the top of the hill was the home of Joseph Culham, who operated a butcher shop out of his house and whose grandparents had immigrated to Etobicoke from Wales in 1838.