Streets of "The Kingsway"

Bannon Avenue: Named in 1915 after the Patrick Bannon family, who lived at 86 Kingsway Crescent.  Patrick was born in Quebec in 1844, and first appears in Lambton Mills in the 1871 census.  In the 1880s, he and his wife Ann built their house (shown below,) which is listed on the City’s Inventory of Heritage Properties.  Their three sons remained in the area: James as a carpenter, John as a market gardener, and Joseph as a machinist. Patrick died in Lambton Mills in 1913. 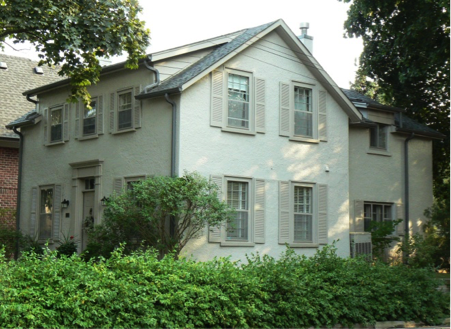 Bannon House at 86 Kingsway Crescent in 2011
Elliott Avenue: Named in 1919 for the Simon Elliott family, who made Lambton Mills their home ca. 1880. In 1909, Thomas Elliott subdivided the property between the Humber River and Kingsway Crescent, and later developed areas on Royal York Road and Prince Edward Drive.

Government Road: This street originally was the northern boundary of the King’s Mill Forest Reserve, established by John Graves Simcoe on behalf of the British government in 1793 to provide timber for the King’s Saw Mill (see Kingsmill Road below.) This reserve ran from Government Road, south to The Queensway, and from Royal York Road east to the Humber River.

Hyland Avenue: Named for Nelson A. Hyland who arrived in Lambton Mills ca. 1909 as a young clerk to help open a new branch of Molson’s Bank in a former residence on the north side of Dundas Street, opposite Prince Edward Drive. He eventually became the bank manager, owned land in the village and was a trustee for Lambton Kingsway School. 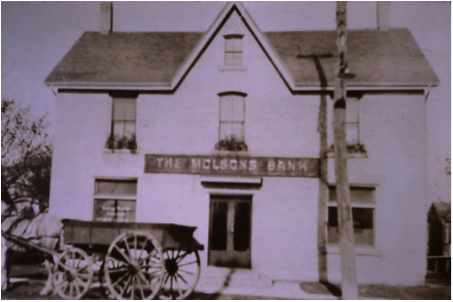 Molson’s Bank in Lambton Mill ca. 1909 (now demolished)
Jackson Avenue: May have been named in 1912 for the Jackson family, residents of Lambton Mills.

Kingsmill Road: Named after the King’s Mill, a saw mill built by the British government in 1793 and Toronto’s first industrial building.  It was located on the west side of the Humber River, where the Old Mill Restaurant and Hotel is today.

Tremayne Avenue:  Named in 1926 for the late Reverend Canon Francis Tremayne, former rector of Christ Church Mimico Anglican who had died in 1919.  His name appears on land transfer documents between Christ Church Mimico and the developer of The Kingsway, Robert Home Smith. His son, Reverend Herbert O. Tremayne, was rector of St. George’s on-the-Hill Anglican Church from 1889 until he transferred to Christ Church in 1907 to assist his father, succeeding him after his death and remaining at Christ Church himself until 1934.

Usher Avenue:  Named after George Usher who owned property in the vicinity of Government Road and The Kingsway in the early 1900s.

Willingdon Boulevard: Named in 1912 after Sir Freeman Freeman-Thomas, the 1st Marquess of Willingdon, Sussex, England, the Governor General of Canada from 1926 to 1931. As a result of new autonomy given Canada in 1926, he was the first Governor General to act on the advice of Canadian ministers rather than acting as an agent of the British government.

Main sources used: Etobicoke Remembered by Robert A. Given, The Kingsway by Bess Hillery Crawford, Personal files of Denise Harris