Islington Dairy Farmer was Enterprising from a Young Age 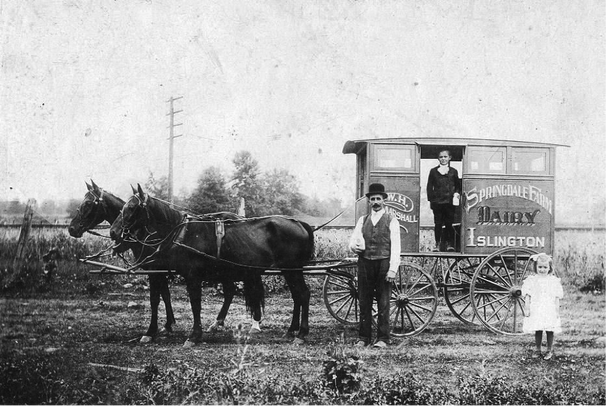 William H. Marshall’s Springdale Farm Dairy delivery wagon, Islington, ca. 1909 (Photo Source: Robert Marshall, William H. Marshall’s Great-nephew) Courtesy: Hospital for Sick Children Archives.
Many of us enjoy our weekly glimpses into the high-powered world of modern advertising through the antics of Don Draper in AMC’s Mad Men. But how did William H. Marshall, owner of Springdale Farm Dairy in Islington, advertise what he had to offer in 1909?  He simply hooked up his horses to his milk wagon, grabbed a couple of bottles of fresh milk to show off, and dressed himself, his son Wilbert, and his daughter Edythe in their Sunday best for a photo.  The simple result is this captivating “publicity shot” from a bygone era in Etobicoke.

​William had emigrated from England with his parents and siblings in 1889 at the age of 20. The family settled on a farm near Islington.   In 1897, William married Alice Eveline Culham, whose family roots in Etobicoke dated back to 1820.  William and Alice lived in a house on Dundas Street West in Islington, but William also owned the long, narrow 25 acre lot that you see in this photo where he raised and milked the cows that supplied his dairy business.  This property was located on the south side of Dundas, just west of today’s Shorncliffe Rd.  The Canadian Pacific Railway ran through William’s property just south of Dundas – exactly where its route lies today - and its tracks can be seen in this photo, running atop a berm behind the milk wagon.

In later years, Wilbert Marshall recalled how he started helping his father with the milking at age seven.  While today’s eight year old child might boast of high scores on the latest Xbox game, Wilbert at that age boasted that he could milk eight cows an hour!  By age 17, he was running the farm’s entire threshing operation, including hiring and firing workers.

But Wilbert didn’t stay in farming... in 1926 he opened his own insurance agency in Islington village.  His youngest brother, Rowland, became his business partner in 1935, and they operated the business until retirement.  Not content with only one business, the Marshall brothers also became involved in expanding telephone service in Etobicoke when they were appointed special representatives for the Bell Telephone Company in 1941.  When they started, there were 350 telephone subscribers in the township; by 1952, there were 3500 subscribers in Islington alone.