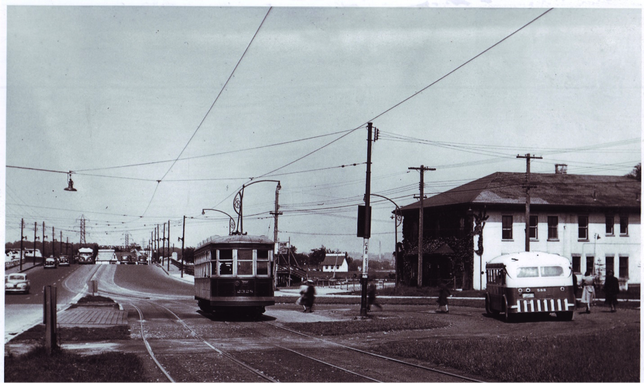 Lake Shore Blvd. W., facing east towards the Humber River bridge in 1942. The large building on the right is the National Sporting Club, bought by Abe Orpen ca. 1921. Toronto Archives/PHOTO
Most people are surprised to hear that south Etobicoke once had at least six active “gambling joints.” I told the story of the Brookwood Club on Royal York Road on September 4, 2014, and today I’ll tell you about the National Sporting Club – the first and largest of these clubs, opened in Humber Bay by Toronto resident, Abe Orpen.

Ca. 1920, Abe purchased the former Humber Beach Inn to house his new club. It was a large brick building on the south side of today’s Lake Shore Blvd. W., just west of the Humber River. He always insisted that it was “just a place for men who love sports.” Etobicoke attracted these establishments because its location was relatively close to the city, yet it had a very small police force (only eight police officers in 1934.)

Abe was a successful Toronto businessman who lived on fashionable Sherbourne Street. He had friends in politics, high society, the media and the police. Despite the fact that he enjoyed many activities on the edge of legality, including gambling, horse racing and boxing promotion, his charisma and generosity towards people down on their luck endeared him to citizens at all levels of society.

Raids on his establishment occurred, but they were few and far between. Often by the time the police arrived, the club had mysteriously “closed early.” In one large raid in 1931, police discovered 93 men playing legal games, such as billiards. However, further searches under the floor boards revealed guns, gambling paraphernalia and $3,700 in cash. Orpen and his manager were arrested, pleaded guilty to keeping a gaming house, and were each fined $150. Sixty men were also arrested as “found-ins” and fined $5 each.

Abe was known for his fairness to his customers. If a man lost more than his family could afford, Abe would refund his losses, but prohibit him from playing again. Abe also paid for cab rides home for those who came with full pockets, but “lost their shirts” at his tables. In Toronto, he and his wife Isabella operated a soup kitchen for the poor during the Depression, and paid for the funerals of several club members. Abe died in 1937, and his headstone in St. James Cemetery reads, “He fed the hungry, he clothed the poor and he buried the dead.”

After Abe’s death, ownership of the club transferred to his son, Fred. One night in 1941, his club and another club with a different owner in the east end were dynamited, and even though the damage to Fred’s club was minor, he closed it soon after. Intense raids conducted jointly by the Toronto and Ontario police forces finally succeeded in eliminating the last club in South Etobicoke by 1943. Orpen’s building on the lakeshore was sold and used as tourist hotel until it was demolished in 1968 to widen Lake Shore Blvd. W.