At the intersection of Martin Grove and Albion Roads lay the village of Smithfield. It was likely named after Robert Smith and his three sons - Eli, Thomas and Levi - who owned 200 acres of farmland straddling the intersection.

Smithfield has an interesting history. For example, it had a church at a much earlier date than Islington village. On the first of April, 1839, Robert Smith donated a half-acre site for a Wesleyan Methodist chapel on the north side of the Albion Road some fifty yards west of Martin Grove to church trustees Eli Smith, Fisher Allison, Nathan Martin, Stephen Burgess and John Edmondson .  Joseph Stonehouse and Andrew M. Jackson witnessed the deed.

In the Christian Guardian dated August 14, 1839, under the heading of “The Yonge Street Circuit”, there appeared this notice:

“Chapel opening - the new Wesleyan Methodist Chapel in Mr. Smith's neighbourhood, Gore of Toronto, will be opened on Sabbath, the 18th of the present month, by two religious services. The Rev. Egerton Ryerson will officiate at 10 o’clock a.m. and the superintendent of the Yonge Street Circuit, George Poole, at 3 o’clock p.m.  A collection will be made at the close of each service to aid the trustees in defraying the expenses of the building.”

The Rev. Egerton Ryerson mentioned above was the founder of the public school system of Ontario and in his honour the Ryerson Institute of Technology at Church and Gerrard Streets was named. Actually the chapel was in Etobicoke and not in the Gore of Toronto. The opening notice was written from Yonge Street on August 8th.

Smithfield Wesleyan Chapel was on the “Humber Circuit” in 1855-6.  The Wesleyan minister on this circuit also served congregations at Burwick, Gore branch, Lindsey, Bolton, Monkman's, McDougall's, Caesar's, Kizer's, Hewett's, Thomas and John Stonehouse’s Roadhouse, and Christopher Train's Chapel. Those at Smithfield who donated to the Missionary Society that year included Robert and Levi Smith, Joseph Rowntree, Jessee Mabee, Isaac Maxwell, and William and Joseph Wallis. For the year 1865-6, Smithfield Wesleyan Chapel was on the “Weston Circuit”, along with Burwick, Stonehouse's, Crosson’s and Weston. The Smithfield members who supported the missions that year included David Stewart, Alex Card, Isaac Maxwell and Mrs. Stegman. Smithfield Wesleyans were last listed in the denominational directory for the year 1867-8 when Miss Brooks collected.

It is interesting to note that Stonehouse’s chapel was on Martin Grove Road north of Richview Side Road, and that St. Andrew’s was the old name for Thistletown United Church, which began from revival services held in 1873.  When the original log Smithfield chapel was dismantled and replaced by a brick church, the logs were taken to Rowntree's sawmill on the Humber, and planed to provide material for the Thistletown church, which was built on the Albion Road. Original trustees of the Thistletown church were Alex Card, Jessee Mabee and Joseph Crosson.  Apparently many of the Wesleyan Methodists of Smithfield gradually went to Thistletown to worship.

Albion Rd. looking east from west of Martin Grove Rd. ca. 1912. Farmer Garnet Anderson is standing behind his horses. James Robinson owns the house on the right. Smithfield Wesleyan Methodist Church is on the left.
Smithfield also had a Primitive Methodist Chapel. William Lyle donated a site for it back in October, 1845 on the west side of Martin Grove, north of Albion.  Records for the year 1874-5 show that Smithfield still had a thriving congregation of Primitive Methodists, which included J. Kellam, George Ella and Mrs. Wallis.  Decades later, the various branches of Methodism were united on a national level. 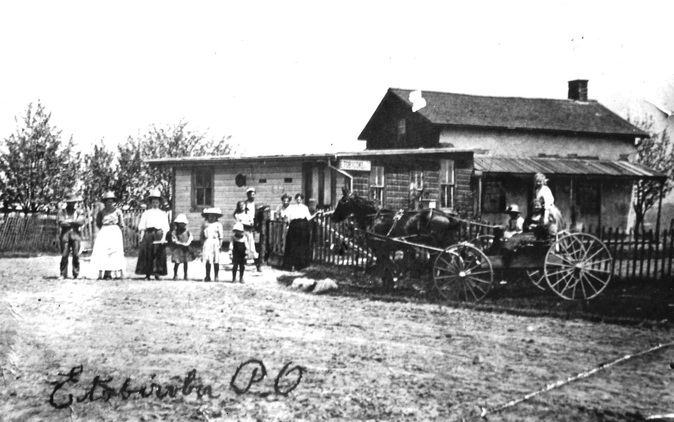 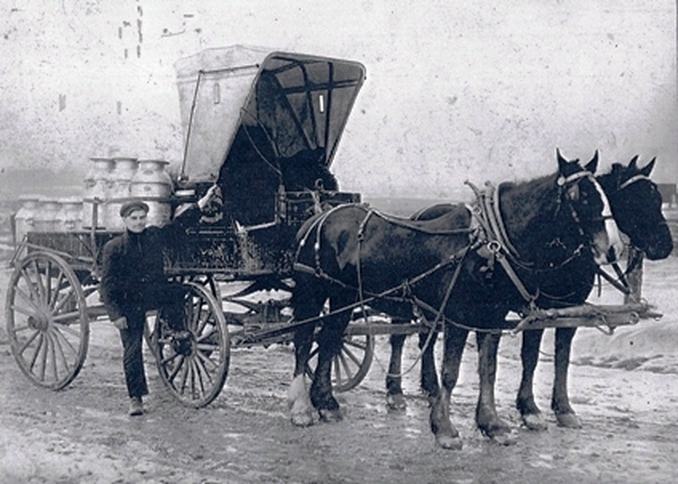 A wagon from "Cameron Smithfield Dairy" on its rounds, picking up milk cans from local farmers in early 20th century.
Today, there is almost nothing left to suggest the Smithfield of yesterday. Jeremiah Brooks’ century old blacksmith shop with its classic corner doorway on the southwest corner of Albion Road and Martin Grove has been demolished, as has Jessee Mabee's blacksmith shop on the northwest corner.  Jessee was the son-in-law of Robert Smith, taught Sunday school at Smithfield in the mornings, was Sunday school superintendent at Thistletown in the afternoons, and led prayer meetings on Wednesdays. The late Rev. W. F. Wilson preached his first sermon in Jessee's kitchen. Jessee had also donated and wrought all the ironwork used in the church, which was demolished in the 1960s.  Oliver Prentice was the well known wagon maker at Smithfield well over a century ago; John Horner was the tailor; and Angus McDonald was the butcher. Art Ella’s butcher shop opened in 1905.

However, one small remnant of old Smithfield has survived.  In 1874, a new brick school was built immediately west of the Wesleyan Methodist Chapel. Over its front door was a stone plaque displaying the school's name as "School Section No. 7". This school survived until 1954 when the students were bussed to Thistletown and the school demolished. In 1966 a new school called Smithfield Senior Public School was built on Mount Olive Drive, and the old "School Section No. 7" plaque now hangs in the 1966 school's front lobby - the last surviving reminder of the pioneer village of Smithfield.

Researched and Written by James V. Salmon & Robert A. Given (Reprinted from the Etobicoke Press, 1957.)  Updated in 2016 by Denise Harris.
Learn About More Neighborhoods