Robert H. Tier Was Known for his Prized Celery at a Time When the Vegetable Was Considered High Class 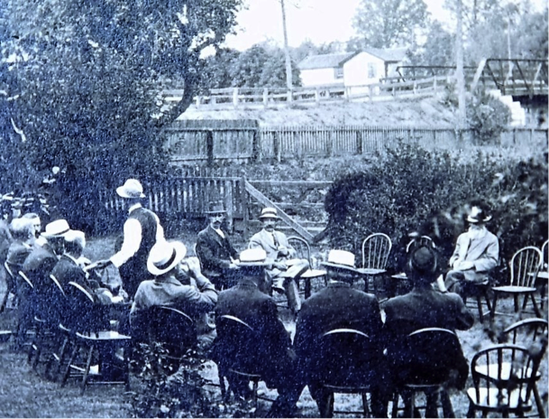 The convention of the Ontario Celery Growers Association met in 1910 at Robert Tier’s Islington farm. Photo is looking north toward Dundas Street West and the iron bridge over Mimico Creek. Courtesy: MONTGOMERY’S INN
In the late 19th and early 20th centuries, the humble celery plant was considered a status food that only the wealthy could afford. Tall, cut-glass “celery vases” were used to serve company an entire head of the vegetable vertically, with the leaves still attached. Celery began to lose its aura of prestige by the 1920s when cheaper varieties became available. This change was reflected in a new canoe-like shape for celery servers: long, narrow, low and made of less expensive pressed glass.

Robert H. Tier was a market gardener in Islington in exactly the right time period to capitalize on celery’s social prominence. He arrived in Canada from Sussex, England in 1861. In 1863 he married Sarah Ide at St. George’s on-the-Hill Anglican Church. The Tiers purchased a 15-acre property on what today would be the southwest corner of Islington Avenue and Dundas Street West. They built a large house in an Ontario Gothic Revival style facing north on Dundas. Behind the house, the land dropped down into the Mimico Creek valley where the dark soil was rich in nutrients and perfect for market gardening. Robert also bought a former Temperance Hall sitting empty west of Burnhamthorpe Road and moved it to the west side of his house. He used the main floor to sell his vegetables, and the second floor was available for use by community groups like the Boy Scouts and Red Cross.

Tier grew many different types of vegetables, but his specialty was celery. He would painstakingly cover each stalk with white paper, resulting in plants that produced less chlorophyll and had a sweeter taste. Every summer, retailers would drive for miles to buy Tier’s high quality product. In 1910, he was honoured when the Ontario Celery Growers Association held their annual meeting on his property.
Robert and Sarah Tier had six children: two boys and four girls. Sarah Tier died in 1907 and Robert Sr. in 1913. They are buried in St. George’s on-the-Hill Anglican Cemetery.  Their sons, Thomas and Robert Jr., married two sisters from Islington: Edith and Eva Johnston, respectively. Thomas worked as a sales agent for the Massey Farm Implement Company. He was an Etobicoke councillor 1918-24, and Reeve 1925-26. Robert Jr. remained on the home farm and was a market gardener like his father.

The next time you’re munching on a celery stick, take a few minutes to remember Robert Tier and his family, and the high-class role this humble vegetable once played in our society.