Robert DeCoursier - and "A Murder in Lambton Mills"

From the beginning of this tale of murder in the quiet Etobicoke village of Lambton Mills, there was never any doubt that Robert DeCoursier was the murderer and that his brother, Edward, was his victim. Yet the full story behind this tragedy was not revealed until after Robert had been convicted of first degree murder and less than three weeks before his scheduled execution.

​On Friday, September 26, 1879, Robert was seen by several neighbours leaving his home on the southwest corner of today’s Dundas St. W. and Prince Edward Dr. He was carrying a double-barrelled gun, a powder flask and a shot belt. He walked east to the wagon shop where his brother Edward worked, located behind a blacksmith shop on the north side of Dundas Street. His brother wasn’t there, so Robert sat down and waited. When Edward returned, Robert stood up and fired his gun directly at his brother, where Robert shot him a second time. By then, several neighbours had arrived and saw the final shot. 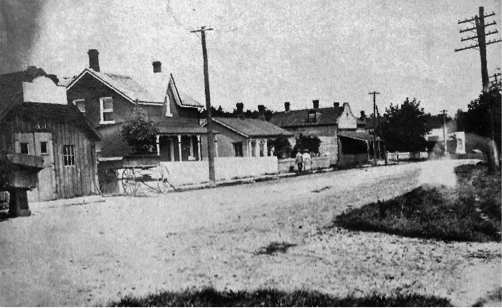 Dundas Street looking east towards the Humber River. The wagon shop where the murder occurred was located behind the blacksmith shop seen at the far left. Neighbours from all houses in this photo testified at Robert’s trial.
Robert immediately headed back west on Dundas, stopping four doors down in front of the Methodist church to put something in his mouth, and then continuing until he reached home. Neighbours arrived at his home to find Robert lying on a bed, unresponsive and frothing at the mouth. Dr. Thomas Beatty, who lived on the north side of Dundas opposite the DeCoursier home, arrived quickly and was able to save Robert’s life. It turned out that he had eaten prussic acid (hydrogen cyanide) at the church. Soon after, Robert was arrested by local Constable Ide and taken to the Don Jail in Toronto. 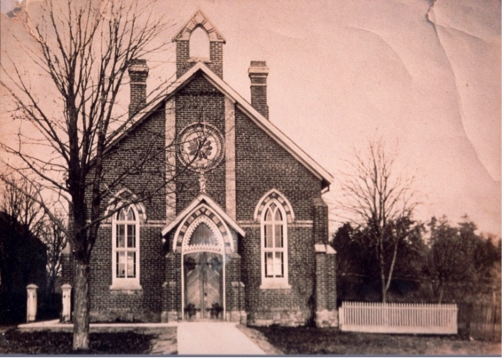 Lambton Mills Methodist Church where Robert DeCoursier swallowed prussic acid.
What do we know about Robert and Edward? Their parents, John DeCoursier and Emma Tucker, married in Toronto in 1853. Their first child, Robert, was born in Toronto in 1854, They moved to Lambton Mills in 1856 where they had two more sons: Edward in 1857 and Henry in 1862. John and Emma either purchased or built an small hotel on the southwest corner of Prince Edward and Dundas. John died in 1865, and Emma operated the hotel alone until her own death in 1873. They were buried in the cemetery of St. George’s Anglican Church on-the-Hill in Islington. According to Emma’s will, her three sons were to share her estate equally, but the division had not yet been completed. Although orphaned, the young men had strong support from aunts and uncles on both sides of the family.

Dr. Beatty, who was also the coroner, immediately scheduled an inquest that was held in Robert’s home the following day. Robert was arraigned on a first degree murder charge, scheduled to go to trial on April 27, 1880 in the York County Courthouse on Adelaide St. E.
During the trial, the jury listened to witness after witness, including many neighbours, relatives and friends of Robert’s, who were dumfounded by his actions, but were even more confused by his refusal to offer any explanation. Much time was spent discussing his father, John DeCoursier. Dr. Lett of the Provincial Lunatic Asylum testified that John had spent time there after being declared mentally unfit. John’s death in 1865 was a suicide, caused by John ingesting prussic acid. The defence attempted to draw a parallel between John’s and Robert’s behaviours, hoping to lessen the severity of his punishment. However, Justice Burton stated that insanity had not been proven in Robert’s case.

The jury had difficulty reaching a verdict, but eventually found him guilty, with a strong recommendation for mercy. The Judge then asked Robert why a death sentence should not be imposed, and Robert responded that he had nothing to say. He was sentenced to hang on June 16, 1880. No appeals were filed.

On May 3, 1880, Robert broke his silence and granted an interview to a Globe reporter. The reporter prefaced his coverage of the interview by saying that he could find no person who did not agree that Edward deserved everything he got, for he was “a treacherous villain who would do anything for spite or money.” For Robert, while acknowledging that the shooting was wrong, there was consensus that he was, “always a noble, honest and industrious young man.”

Robert told the reporter that he and Edward got along well as boys. After his mother died, Robert began keeping company with a local girl named Mary Mills. He described her as “a comely girl – not one of the brightest but would make a good wife.” They had been engaged for one year.

A few years earlier, Robert and Edward had started a business producing and selling soda water using inexpensive do-it-yourself equipment. Robert wanted out of the business because they were earning little money, but Edward did not agree. This had been causing friction between them for some time.

In early 1877 Robert went to Meadowvale, Ontario to work making barrels so he could support Edward and Henry. Every Saturday, he sent $5 of his $8 weekly earnings back to Edward.

While Robert was away, Edward told Mary that Robert wasn’t interested in her anymore. Edward then swore on a bible that he would marry her and persuaded her to be intimate with him. When Mary found out that she was pregnant, he refused to marry her and never publicly acknowledged the child as his.

Robert returned to Lambton Mills on April 11, 1878 – the same day Mary gave birth to Edward’s son. Edward freely admitted that he had only “ruined” Mary to annoy Robert and never had any intention of marrying her.

Edward had been looking after the distribution of their mother’s estate during Robert’s absence, and he was now refusing to give Robert his share. In addition, just prior to the murder, Robert had returned to Meadowvale for a brief visit, and when he came back to Lambton Mills, found that all of his possessions had been sold by Edward.

After this story appeared in the Globe, Robert’s lawyer tired to appeal his death sentence, but the judge denied the request saying that as reprehensible as Edward’s behaviour had been, Robert had still committed first degree murder.
​
Ultimately, however, Robert managed to escape the hangman’s noose.   The day before his scheduled execution, he committed suicide in his cell by ingesting prussic acid, just like his father had before him.  An inquest failed to uncover who had smuggled the poison into the jail.

A debate quickly arose on where to bury Robert. Normally an executed person was buried in the jail yard. However, Robert wasn’t executed, and his younger brother Henry produced a petition asking that Robert be buried at St. George’s Anglican Church on-the-Hill with his parents and brother Edward. Henry’s request was granted, and Robert was buried with his family. A Globe article aptly concluded, “Thus closed the last act in this truly sad drama.”

​But that wasn’t quite the end… on the morning of his suicide, Robert mailed a package to his uncle, containing a volume of poetry by Thomas D’Arcy McGee inscribed “To my uncle E. Tucker who has done as much for me as if I were his own son, from his affectionate nephew, Robert W. DeCoursier, not forgetting my kind and affectionate aunt, who has attended me with the affection of a mother.”
But what happened to Henry DeCoursier, who had lost both parents and both brothers?  And how about poor Mary Mills and her baby?
Henry left Lambton Mills very soon after Robert died. By the 1881 census Henry, now 19 years old, was living in Nottawasaga, Simcoe County, with the Michael Steed family. Michael’s wife, Eliza, was Henry’s aunt on his father’s side. She had died in 1863, and Michael had remarried.  Henry had shortened his surname to Courcier and was working as a wagon maker. In 1890, he married his cousin, Isabella Steed. They moved to Revelstoke BC where Henry became a store keeper and they remained there for the rest of their lives. They had two daughters and three sons (one son died young.) 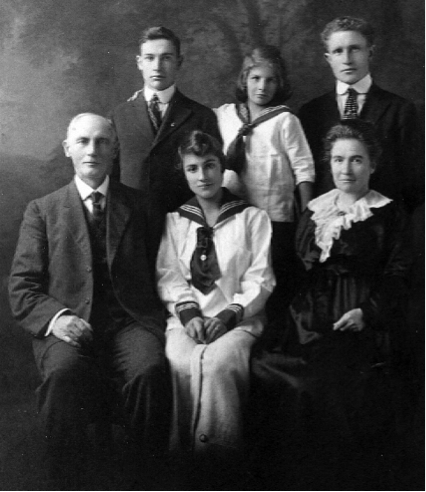 Henry Coursier front left, wife Isabella Steed front right, and children Eric, Heber, Olga and Isabella (Ancestry)
​The birth certificate for Mary Mills’ son gives his name as Edwin DeCoursier Mills with the word “illegitimate” written above it. The space for “Father” is blank. In the 1881 census, Mary is living with her widowed father in Lambton Mills and Edwin is not with her. Three-year old Edwin was living with the family of Joseph and Martha Scott on a farm near Eglinton and Renforth. In 1884, Mary married widower John Oliver Parker, who had been a friend of Robert’s and the man who started him in the soda water business. John already had five children from his first marriage. Edwin lived with them and used his step father’s surname for the rest of his life. Mary and John had two more sons together. John worked as a brass finisher and they lived on Garden Avenue, just east of High Park. Mary died in 1920. 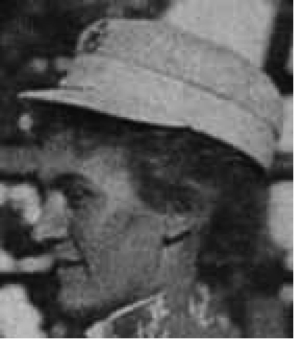 Mary Mills Parker (Ancestry)
When he grew up, Edwin married Theresa Walsh in 1902 and they had a son, John Oliver Parker, in 1903. When Theresa died in 1939, Edwin married Charlotte McCauley in 1940. Edwin lived in Toronto his whole life and died there in 1965.
﻿
Researched and Written by Denise Harris.
View More People