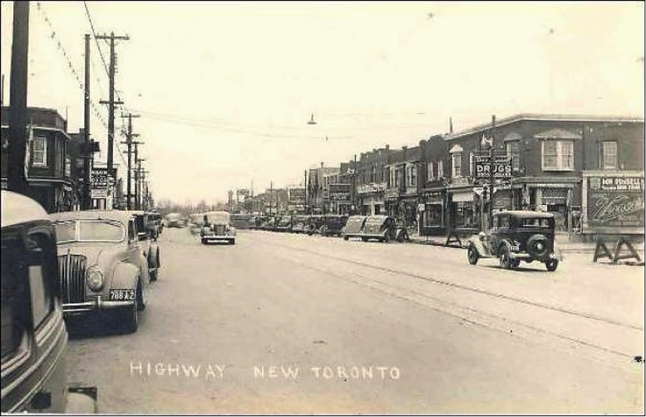 Lake Shore Blvd. W. at Sixth Street, looking east, in 1939. Don Russell Drugs is on the southeast corner. A drugstore with the same name operates in the same store today. (New Toronto Historical Society)
Some called Donald Russell unwise when he opened his drug store in New Toronto in 1933 – in the middle of the Depression – and he admitted later that it was a very difficult time. He slept in a room at the back of the store to save money. Many patrons recalled his kindness in filling needed prescriptions when they were broke, letting them pay later.

Don was born in Norval in 1907. After completing high school, he decided to become a pharmacist, which required a two-year apprenticeship, followed by three years of university. After graduating from the University of Toronto in 1931, he worked for two years in Windsor, then decided to open his own pharmacy in New Toronto. He rented a former hardware store at what is now 2891 Lake Shore Blvd. W., on the southeast corner of Sixth Street. He gradually enlarged the store to three times its original size so he could carry a wider variety of merchandise. He stocked unusual items for a pharmacy, like bird seed, portable radios and camera equipment. He also carried more cosmetics than any other store in the Toronto/Hamilton area.

Don married Dorothy Reynolds in 1935, and they had two children, Robert (Bob) and Beverley. Robert also became a pharmacist and joined his father’s practice after graduation.

About 1950, Don opened two branches of his drug store: one in a new plaza at Burnhamthorpe Road and Martin Grove Road, and the other at 4900 Dundas Street West in Islington village. The Islington store closed in 1957 and its prescription database was transferred to the Burnhamthorpe Store, which remained open until 1981.

However, his whole life he had been fascinated by politics and soon he could not resist its call. After a one-year term on the school board in 1948, he became a councillor for two terms. He next ran for mayor, a position he held from 1955 to 1967. He also served on Metro Council for several years. When New Toronto amalgamated with Etobicoke, he was easily elected to the new Board of Control.
On December 17, 1971, Don was at his home on Lakeshore Drive when he passed away suddenly of a heart attack at age 64. A park on Birmingham Street, west of Kipling Avenue, was renamed Don Russell Memorial Park in his honour. His son, Bob, carried on the pharmacy business in New Toronto, retiring and selling the store in 2011. Today “Don Russell Drugs” is operated by a new owner in the same store where the business started 84 years ago.